T.H. White's 'Once and Future King' 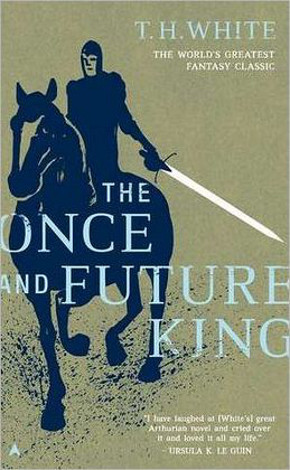 The story of King Arthur and his knights is arguably one of the greatest fantasy legends, and it’s proven to be a powerful inspiration for numerous authors. Ranging from John Steinbeck's The Acts of King Arthur and His Noble Knights to T.A. Barron's The Lost Years of Merlin to Mary Stewart's Crystal Cave novels, Arthur and Merlin have appeared in numerous fantasy novels, films and televisions shows over the last century, but none have quite had the impact as Terence Hanbury White’s The Once and Future King

T.H White’s childhood in Bombay, India was a troubled one. Born on May 29th, 1906 to parents in a strained marriage, he would later recount the tension and sometimes violence between his alcoholic father and emotionally distant mother. The troubles left a lasting impression on the boy, and would later influence his writing. By 1911, White found himself in England, and over the next two years, his father and then mother returned to India, leaving him with his grandparents. In September of 1920, White enrolled in Cheltenham College in Gloucestershire, where he faced a cruel and violent primary education. However, it was at the school where he was introduced to Sir Thomas Malory's novel, Le Morte d ‘Arthur, the story that would have a profound impact on his writing.

In 1924, he graduated and left for Queen's College in Cambridge, where he was introduced to L.J. Potts, who would become a major literary influence on the young man. While studying at Cambridge, White returned to Morte d' Arthur, writing an essay on the novel, and by 1928, White had begun writing and produced several novels before 1929. He postponed his studies due to a terminal diagnosis of tuberculosis, but eventually returned to Cambridge, where he graduated with distinction, and shortly thereafter worked at several schools, eventually ending up at Stowe, as the head of the English department. He remained at the post until 1936, when he resigned and took up residence in the gamekeeper's cabin. Desperate for something to read, White revisited Malory's novel, finding it to function as a "perfect tragedy," one that contained recognizable, realistic characters with plausible motivations.

White began writing, and in January 1938, he turned over the manuscript to The Sword in the Stone to a publisher. The story allowed him to inject the modern world into Arthurian legend, pointing out that while their artifacts had aged, the human race had largely remained the same. Accordingly, his characters became a study in psychology, with relatable motivations and issues that drive their actions. The Sword in the Stone followed a young Arthur and his training at the hands of Merlyn the Wizard and became an immediate success in Europe and the United States, where it was a selection in the Book of the Month club. He moved to Ireland and began work on The Witch in the Wood in early 1939, which saw Arthur as a young king facing numerous political and military pressures. It was an appropriate storyline for the time, as England teetered on the edge of war against Germany. By May, the second book was completed for the publisher and soon after, the rights to The Sword in the Stone were sold to both the BBC for a radio serial, and to Disney for a cartoon adaptation (later released in 1963). White soon began work on the third installment in the series, titled The Ill-Made Knight, all the while working on edits for the second book.

The Ill-Made Knight marked a transition in the series: a darker and more serious tome, focusing on the relationship between Sir Lancelot, Guenevere and Arthur, and the ramifications that the tension has on Arthur's Round Table. White considered the character of the knight carefully, estimating that the man was likely sadistic, highly strung and emotional. Much has been speculated about White's own sexuality, and his biographer, Sylvia Townsend Warner, speculates that his relationship with his mother might have left him without the capacity for any form of healthy relationship. White finished the tale in October, which would be published in 1940, and began moving on to the next story.

The fourth addition to his series was titled The Candle in the Wind and had already been roughly written as a play. White wrote to his mentor, Potts, noting that "I have suddenly discovered that (1) the central theme of Morte d' Arthur is to find an antidote to War, (2) that the best way to examine the politics of man is to observe him, with Aristotle, as a political animal." He also realized that he would need to write another volume, one that reunited Arthur and Merlyn. The Candle in the Wind was an even darker volume, focusing on Arthur's final days, as all of the storylines came together. By 1941, he had finished the final volume, The Book of Merlyn, turning in the manuscript for the entire series in November, The Sword in the Stone, The Witch in the Wood, The Ill-Made Knight, The Candle in the Wind and The Book of Merlyn all under the title The Once and Future King.

However, his publisher found that White’s late revelation that the books were a war epic required major revisions to all of the books. White was reluctant to make major changes, and as the Second World War brought about paper shortages, a long book would be impossible to print. The book sat unpublished as a protracted argument ensued, and was eventually published in 1958 with the first four volumes collected as The Once and Future King. White gave up the fight to see the five stories bound together, and The Book of Merlyn was left aside, published later in 1964. As The Once and Future King was published, White sold the rights for a Broadway musical, which would eventually run for three years and granted White a new financial freedom. The musical also prompted Disney to begin production on their cartoon version of The Sword in the Stone.

In 1963, White travelled to the United States for an extended speaking tour of the country, where he spoke about teaching, and towards the end of his tour, his health began to deteriorate, leaving him hospitalized at one point. Still, White was thrilled with the tour and sad to leave, travelling by ship to Europe. On January 17th, 1964, crewmembers of the S.S. Exeter docked at Piraeus and found White’s body in his cabin. The cause of death was determined to be heart disease, and White was buried in Athens, Greece.

White left behind an important legacy of fiction, transforming myth into modern, relatable storytelling for the present audience. Fantasy author Lev Grossman has recently championed White’s story, calling it “a sprawling masterpiece of glowing historical prose and psychological power” on NPR. The Once and Future King broke down one of Europe’s most epic tales by realizing the importance of the characters in the midst of incredible events and has thus remained an enduring classic.