‘The Wonder’: No Small-Screen Miracle 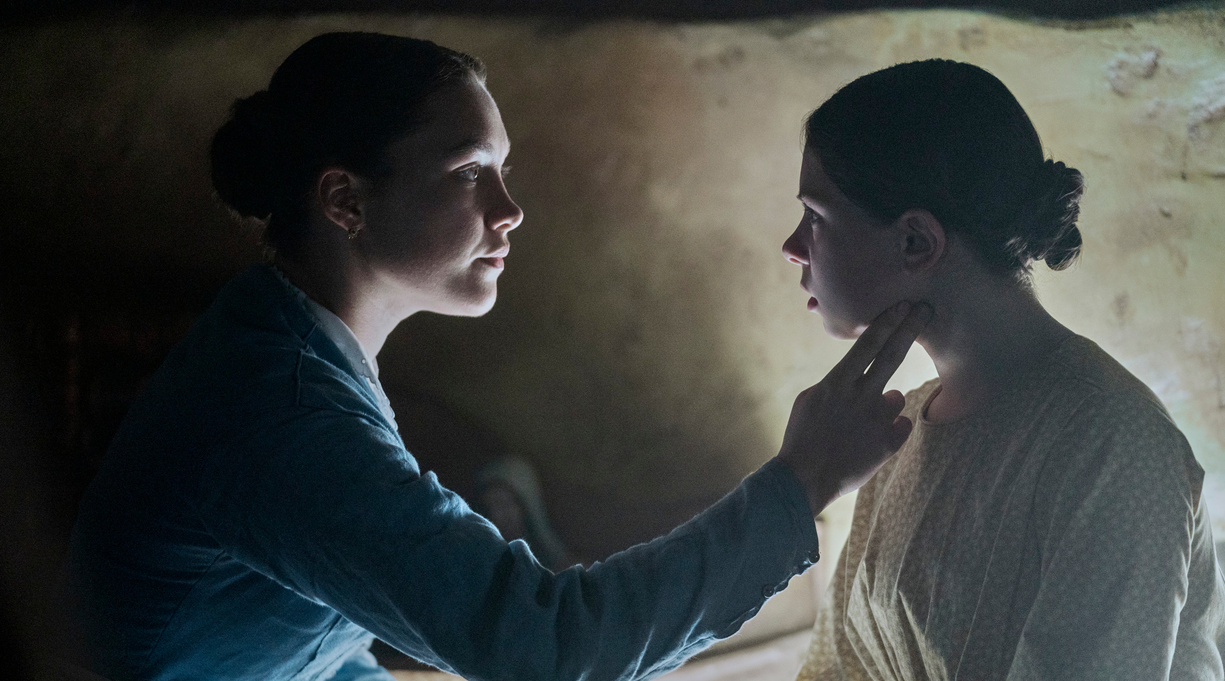 From left, Florence Pugh and Kíla Lord Cassidy in ‘The Wonder.’ Photo by Aidan Monaghan/Netflix

In Emma Donoghue’s 2016 novel, The Wonder, set in 1859, English nurse Lib Wright—who recently treated soldiers in the Crimean war—gets a very unusual request from a group of prominent men in a small, rural Irish town: They’re willing to pay her handsomely to travel there and simply observe Anna O’Donnell, a local 11-year-old, for a fortnight. The girl and her devout Catholic family claim that she hasn’t eaten any food for four months, yet she lives on; she displays a few unusual physical traits, including swollen ankles, but otherwise seems completely healthy. The men who hired Anna want her and a local nun to watch Anna every minute, in 12-hour shifts, to verify that the girl’s claim is true—that she is, indeed, not eating anything at all.

Anna’s family members and other locals think that her ability to survive without food is a miracle; her doctor grandly theorizes that she could even be a harbinger of a new stage of human development. The fiercely logical and skeptical Anna, however, is convinced that Anna and her family—who are still grieving the recent death of another child—are running some kind of scam. As days go by, Anna’s health starts to falter, until it becomes clear that the girl is wasting away—and could die before the fortnight is up. As the mystery deepens, Lib grows closer to the deeply religious and seemingly guileless Anna. The nurse’s investigation, assisted by a roguish Irish Times correspondent, soon reveals dark secrets.

A new film version of Donoghue’s novel, starring Florence Pugh as Lib and co-written by the author herself, keeps much of what makes the book memorable and moving. But the changes that the filmmakers make—including one particularly glaring omission—result in an adaptation that soft-pedals the book’s fiercest critiques. It premieres on Netflix on Nov. 16.

Donoghue’s book is a fine psychological thriller—one that satisfyingly supplies answers to the mysteries surrounding Emma’s survival. The book also thoughtfully delves into such topics as small-town small-mindedness; big-city ignorance of rural ways of life; sexism in society in general and in the medical profession, in particular. Nearly all the characters, to one degree or another, are shown to be dealing with the lingering and often corrosive effects of trauma. However, the most shocking and powerful element of the work is the reason why Anna stopped eating in the first place—a chilling revelation that makes it to the film intact.

What’s missing from the movie, though, is much of Donoghue’s fiery condemnation of religion—and, especially, the town’s local clergy. At the outset of both the book and film, Lib sees the townsfolk’s unquestioning faith as relatively harmless superstition; as the story goes on, the nurse slowly comes to grips with the fact that the locals’ beliefs are actively harmful, allowing a tragedy to unfold. The book, however, eventually lays blame on a single priest, who could have stopped a great deal of suffering with just a few courageous and compassionate words, but who instead made a very different choice. It’s a brutal moment in the novel that viscerally recalls more recent scandals and abuses in the Catholic Church, making this story feel unexpectedly timely and relevant. The film, unfortunately, simply doesn’t have the same kind of courage.

Other choices made by the filmmakers, led by Oscar-winning director Sebastián Lelio (A Fantastic Woman), are similarly disappointing. For instance, they see fit to give Lib a drug habit—a lazy way to portray her character’s grief, and one which doesn’t exist in the book. (Pugh, a subtle and perceptive actor, doesn’t need such obvious tropes.) It also ignores Donoghue’s vivid descriptions of Anna’s deteriorating physical state—near the end of the novel, she’s hardly more than a husk of a human being—while talented young actor Kíla Lord Cassidy looks, for the most part, curiously hale and hearty. There’s also a bizarre, distracting framing device added to the film—suffice it to say that it begins by showing a real-life movie set, in all its artificiality—that adds absolutely nothing worthwhile to the proceedings. Even this choice would be forgivable, though, if the movie otherwise had the courage of the book’s convictions.