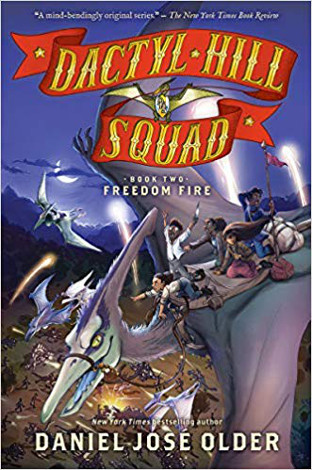 It’s always a little odd to write my annual “what to look forward to” Jan. 1 column, as I do it a good month or so before the New Year but have been paddling about in next year’s books for months. I feel as though I’m writing in three times at once. No wonder the books I’m thinking about are science fiction and fantasy: books that often play fast and loose with time.

Disney’s Rick Riordan Presents imprint continues to expand, with a follow-up to last year’s Aru Shah and the End of Time (Aru Shah and the Song of Death, Apr. 30) and openers for two new series. The Dragon Pearl, by Yoon Ha Lee (Jan. 15), takes figures from Korean cosmology and weaves them into a gripping space opera about a 13-year-old shape-shifting fox spirit named Min who disguises herself as a boy to join the Space Force and discover what happened to her beloved older brother. While it stays nominally earthbound, the funny and heartfelt Sal and Gabi Break the Universe, by Carlos Hernandez (Mar. 4), gives its Cuban-American protagonists the ability to explore the multiverse from their arts-focused Miami middle school.

Three other sequels of note this spring join the current effervescence of non-European fantasy, a burgeoning that’s made me really aware of the thematic limitations of the traditional canon: Henry Lien’s Battle of Champions (Jan. 22), Sayantani DasGupta’s The Game of Stars (Feb. 26), and Daniel José Older’s Freedom Fire (May 14).

There’s one upcoming ghost story I am very eager to read, and that’s Trace, by Pat Cummings (Apr. 2). I’m excited first because I do love a good dose of earthly eeriness to mix in with the more otherworldly fare and second because this is the veteran picture-book creator’s first novel in a career that’s spanned 35 years.

But the book I’m most looking forward to? It’s that fabulous one I don’t know about yet, the one that reaches out and grabs our reviewer so they levitate with excitement and make me want to float too.