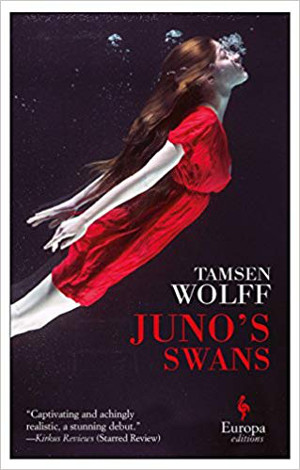 September might be the ninth month, but it will never stop feeling like the beginning of something—the school year, the Jewish year, the fall publishing season. What better to read right now than a debut novel? Here are two great ones that come out this month:

Juno’s Swans by Tamsen Wolff (Sept. 4): “In As You Like It, Shakespeare described lovers who, like Juno’s swans, were ‘coupled and inseparable.’ He could have been referring to Nina and Sarah, young women who meet during a summer theater workshop on Cape Cod. Nina is just 17; Sarah is a slightly older college student working as an assistant acting coach in the program Nina attends. Virtually immediately, the pair fall into head-over-heels love; within a week, they’ve moved in together.…Suffice it to say that what unfolds is by turns tragic, heartfelt, funny, and charming. Set during the Reagan years, the novel has a backdrop of the burgeoning HIV-AIDS crisis and the post-Stonewall emergence of a strong LGBTQ movement, and numerous pop-culture references add authenticity….Captivating and achingly realistic, this is a stunning debut.”

The Mermaid and Mrs. Hancock by Imogen Hermes Gowar (Sept. 11): “In this rollicking Georgian romp, a courtesan and a merchant make an unlikely pair as they navigate the grand palaces and back alleys of London society….Gowar’s debut is rich in detail, with a plot that unfolds like a luxurious carriage ride through the country. Though the story is set in the 1780s, during the reign of King George III, the novel calls to mind 19th-century masters like Dickens and Eliot, who relished the way character can drive and reverse plot….Behind the window trimmings of Gowar’s epic romance lies an astute novel about class, race, and fate that will delight fans of Sarah Perry’s The Essex Serpent and Sarah Hall’s The Electric Michelangelo. An ambitious debut with enough romance, intrigue, and social climbing to fill a mermaid’s grotto to the brim.” Laurie Muchnick is the fiction editor.