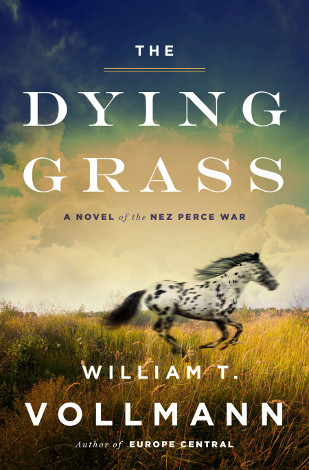 Does William Vollmann know how to write a short book?

That’s certainly not the most important question to ask of the endlessly productive Vollmann, who, working from his secret fortress in the heart of downtown Sacramento, has produced a couple of dozen overstuffed books over the course of the last three decades. Nonetheless, it’s been a constant in discussions of his work for almost as long as he’s been writing. Ever since his multivolume Rising Up and Rising Down appeared in 2003, clocking in at 3,299 pages of closely set type, the twin notions of Vollmann’s prolificness and his logorrheic tendencies have been closely joined.

Suspicions won’t be allayed with Vollmann’s newest, a volume in his projected seven-volume series Seven Dreams: A Book of North American Landscapes that clocks in at a full 1,376 pages, approaching the epic dimensions—and the extensive dramatis personae as well—of War and Peace. The Dying Grass is a complex, multivocal study of the Nez Percé War of 1877, an episode in the larger campaign of wars against Native Americans that found the U.S. Army still smarting from the humiliating defeat, a year earlier, at Little Big Horn and hungry for revenge.

That battle and many others in the Indian Wars are commemorated by a vast library of books featuring such well-known characters as George Armstrong Custer, Crazy Horse, Kit Carson, and Geronimo. In The Dying Grass, Vollmann centers on a more obscure figure, a general named Oliver Otis Howard, a bona fide hero of the Civil War and of postwar Reconstruction and the former president of Washington’s Howard University, named in his honor. Howard had enjoyed many successes in set-piece battles, but up against the Nez Percé and the brilliant tactician whom whites called Chief Joseph, Howard was out of his element. That didn’t keep Howard from rushing forward into combat, though, determined to show his political enemies in the Army and in Washington that he hadn’t softened at his desk jobs in the dozen years since the Civil War ended.

When he began the research, “I had the worst impression of Howard,” Vollmann acknowledges. “I thought that he was not only a bumbler, but also a villain. But bit by bit, the guy sort of won me over: he was a good man doing a bad thing. He was a kind of haunting person for me, and I found myself constantly asking myself, ‘Why did he do what he did?’ ‘Where did he go wrong?’ The answer, of course, is very complicated.”

Arriving at that answer forms the heart of The Dying Grass, with its many characters, some of whom leave the scene early to death. One is a Lt. Thellen, a victim of the Battle of White Bird Canyon, of whom history records only a little. That affords Vollmann the opportunity to exercise his imagination on the known facts—and if there is a known fact, Vollmann has it down, having consumed whole libraries of information and traveled the territory by way of research. (“I try to know as much as possible,” he says simply of his approach.) He thus gives Thellen a compelling back story that makes his death seem all the more unnecessary, even as Howard and his army are propelled against the lances and repeating rifles of the Nez Percé and the Indians, against the whites, with all the inevitability of a Greek tragedy—and with the hubris and moral failure that set such tragedy in motion.

Vollmann has been criticized for varying between moods of literary exaltation and almost journalistic matter-of-factness, sometimes alternating between them in the same paragraph. That, of course, is the discourse of reality, long stretches of sameness punctuated by moments of bliss and terror. The Dying Grass blends the dry prose of the military report and narrative omniscience with the often spicy, often terse conversation of soldiers and their commanders: “There might be no death but a natural one, if Joseph escapes across the line!” an exasperated Howard says, 900-odd pages into the book. “You understand that there must be no more errors in this campaign.”

But errors there are and will be, and on both sides. Vollmann introduces an intriguing poetry in counterpart to the soldiers’ dialogue, representing the viewpoint and speech of the Nez Percé: “he spies out the dark-tipped wings of the otherwise white snow goose,/ the black beak and white breast of the long-billed curlew/but no brothers or enemies.”

The Dying Grass seems sometimes as imposing as Ulysses, though once readers settle into Vollmann’s narrative, the power of the story makes up for the unorthodox presentation. In the end, that story is also of a piece with Vollmann’s long-standing preoccupations as a writer: the appalling violence that seems to be an inherent part of the human psyche and the human experience, the extraordinary clumsiness with which most people blunder from one moment to the next, and the fact that, against the odds, we continue to survive as a species—at least for the moment.

“One thing that I always try to do in the Seven Dreams books is to think about what might have happened if someone had done something a little different,” Vollmann says. “And that’s what makes The Dying Grass disheartening, because the Nez Percé tried in so many ways to avoid conflict with the whites. Looking Glass said that he’d stay on his reservation, and he got screwed over. The people who tried to leave and cross the border into Canada—they got screwed over, too. The ones who came in to surrender to Howard got thrown into prison, and the ones who fought were killed. None of them had a happy ending.”

Our vantage point makes us more sympathetic to the Indians who stood in the way of Manifest Destiny than were Americans of a century and a half ago. Vollmann works hard to keep contemporary attitudes from creeping into his storytelling. Yet he also avoids romanticism and the hero-making of past generations as well. Of one predecessor, Robert Penn Warren and his book Chief Joseph of the Nez Percé, Vollmann says, “We have much better, much richer sources now than he had in his time. Like many then, Warren thought of Joseph as a kind of Red Napoleon. That was the way Howard saw it: he thought that if he was a general whose orders had to be obeyed without question, there must have been an exact counterpart on the Indian side. We now know that up until the end, Joseph wasn’t thought of as a particularly important leader by his own people. He was certainly no Napoleon. And that’s a big theme of all of the Seven Dreams books: our misunderstanding of the Other.”

It’s a complicated story indeed. And as for the next volume in Seven Dreams? Vollmann isn’t saying. “I thought I’d be finished with the series when I was 40,” he says. “Here I am, 56 and still not done.” One thing seems certain, and that’s that the next installment will be a long one—though, as Abraham Lincoln said of his legs, just as long as it needs to be.