Edit my Pro Profile
Publish my Pro profile
Books by A. LaFaye 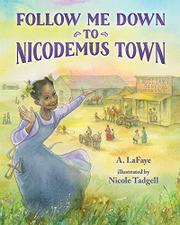 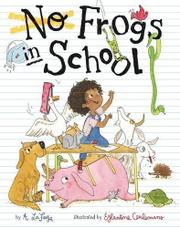 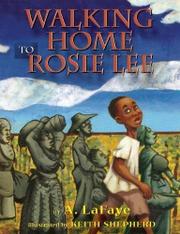 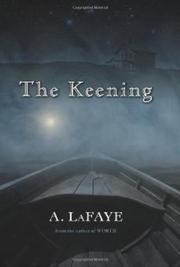 CHILDREN'S
Released: April 1, 2010
THE KEENING
by A. LaFaye
CHILDREN'S
Released: April 1, 2010
THE KEENING
by A. LaFaye
Fourteen-year-old Lyza lives with her parents on an isolated point of land outside a small coastal Maine town in 1918. Her mother lovingly protects her father from the world, protection he needs since he spends most of his time carving the faces of angels only he can see. After her mother suddenly dies during the influenza epidemic, Lyza must move beyond her grief to find a way to keep her father safe from extended family members who would institutionalize him. With the help of her only friend, Jake, she gradually comes to a fuller understanding of both her father's visions and his seemingly tenuous grasp on reality. Lyrical language, an underlying mystery that is only slowly revealed and Lyza's fully realized character make this a compelling read. Her vivid dreams weave in and out of her reality, and less sophisticated readers may find this intermingling confusing at first. Those who are carried along by her story will enjoy a surprise ending that moves this entertaining effort beyond historical fiction into mild though plausible fantasy. (Historical fiction. 10-14) Read full book review > 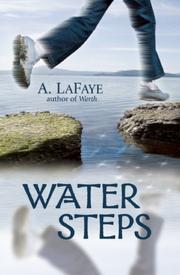 ANIMALS
Released: April 7, 2009
WATER STEPS
by A. LaFaye
ANIMALS
Released: April 7, 2009
WATER STEPS
by A. LaFaye
Eleven-year-old Kyna is terrified of all kinds of water; even a barrel of water for apple-bobbing can cause a panic attack. As a young girl, she watched her family perish in the sea and she has never gotten over her fear. Her adoptive Irish parents, full of stories of "silkies" (oddly enough not rendered as "selkies") and leprechauns, love everything about water and hope to get her to take "water steps" to overcome her fear. Against her wishes, they rent a house on Lake Champlain for the summer. It is during this summer when Kyna learns that the Irish tales hold clues to her parents' mysterious history. It's doubtful that child readers will be surprised by Kyna's discoveries, as the narrative telegraphs the ending from the very beginning. How seals and "silkies" are supposed to be living in a freshwater lake that has no history of seals is not explained, nor is any mention made of the Champ, the mythological creature purported to live in Champlain. LaFaye's intentions are noble—overcoming fears is something that middle graders must do—but the execution is predictable and muddled. (Fantasy. 9-12)Read full book review > 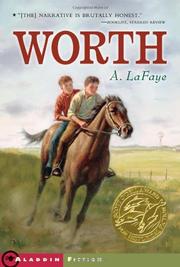 CHILDREN'S
Released: June 1, 2004
WORTH
by A. LaFaye
CHILDREN'S
Released: June 1, 2004
WORTH
by A. LaFaye
"A steer you'd have to pay for, but a boy you could adopt for free," says Nathaniel after he injures his leg and his father adopts John Worth to help work their Nebraska land. Nathaniel is jealous of John, but there's enough bad feeling to go around. Ma and Pa have lost their little girl; John lost his family in a New York City fire (the reason he's an orphan); and Nathaniel fears he'll never walk properly again. Yet John proves his worth, and the two boys become like brothers as Nathaniel realizes the need to make do with what they have and get on with life. It's a lively story of two boys set against a backdrop of the Orphan Trains, range wars, lynchings, drownings, and sheep killings. Something for everyone. (Historical fiction. 8-12)Read full book review > 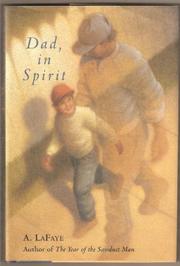 CHILDREN'S
Released: June 1, 2001
DAD, IN SPIRIT
by A. LaFaye
CHILDREN'S
Released: June 1, 2001
DAD, IN SPIRIT
by A. LaFaye
A wildly unlikely tale of family love and near-loss from LaFaye (Nissa's Place, 1999, etc.). Fourth-grader (and narrator) Ebon Jones is the ordinary-man-out in his zany family: his little brother is a math whiz and a master storyteller; his older sister is a costume designer without parallel; his mother carves gargoyles for a living; and his father, a researcher for other people's historical novels, pours his creative energies into fantastic building projects, including a two-story castle in the backyard and the town's annual haunted house. During work on that project, he suffers a mysterious brain injury that renders him comatose and separates his spirit from his body. This spirit manifests itself initially, and most strongly, to Ebon, who takes it upon himself to reunite his father's body and soul to bring him back. What ensues is a string of reunification attempts punctuated by fond reminiscences of his father's wild and crazy ways. The sheer outsized wonderfulness of Dad and studied uniqueness of the family make the story hard to swallow, as does the scattershot approach to reunification—some of Ebon's efforts feel arbitrarily added to stretch the story out, rather than to serve a cohesive narrative. The setting is incompletely established and does not communicate itself to the reader: all the settings seem impossibly close together with very little geography in between, and the weather is remarkably—and unremarked as such—mild for Minneapolis in November. The final climactic scene, in which Ebon goes with his father through . . . the Underworld? Limbo? . . . well, someplace between life and death, is as incompletely realized as the setting. The family dynamic is enjoyable, if unbelievable, but this is not enough to rescue this confused effort. Revisit Ursula K. Le Guin's The Farthest Shore instead. (Fiction. 8-12)Read full book review > 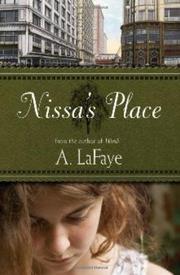 Released: Oct. 1, 1999
NISSA'S PLACE
by A. LaFaye
Released: Oct. 1, 1999
NISSA'S PLACE
by A. LaFaye
The family conflicts of LaFaye's turbulent debut, Year of the Sawdust Man (1998), head toward resolution in this bustling, lightweight, far-fetched sequel. In the two years since her mother, Heirah Rae took off to find something better than her claustrophobic small-town life, Nissa has neither forgiven her, nor warmed to her father's new wife, Lara. Then Heirah Rae resurfaces, with an invitation to join her in Chicago. After an internal struggle and with her father's very reluctant consent, Nissa goes. LaFaye fills the Depression-era story with events—parties, pregnancies, puberty (along with a standard-issue onset-of-menses scene, with all its attending panic), Nissa's first taste of city life and her first exposure to live theater, heart-to-heart conversations, tense confrontations, and fence- mending; all of the characters, from a coterie of vicious gossips to Nissa's idealized parents—one wise, earthy, and quiet, the other flamboyant, outrageous, and artistically gifted—larger than life. For such lean times, money for food and travel flows smoothly, while people talk about pregnancy in chatty, modern, informal terms. The patchy ending is more of a collapsed epilogue, or a separately written short story, in which Nissa returns to Louisiana to organize a public library and, finding her town's racial divide too deep to span, ends up building two. (Fiction. 11-13) Read full book review > 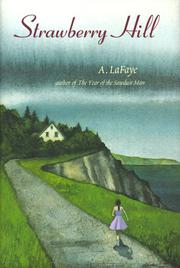 Released: June 1, 1999
STRAWBERRY HILL
by A. LaFaye
Released: June 1, 1999
STRAWBERRY HILL
by A. LaFaye
Two mercurial characters, one 12, the other 88, square off to form a contentious friendship in this multistranded tale from LaFaye (Edith Shay, 1998). Raleia Pendle longs for the imagined simplicity and structure of the olden days, and wouldn't mind conventional parents either: she has six-foot, seven-inch Max and Tiny, two feet shorter and very pregnant, ex-hippies with a parenting style that's entirely too loose, as far as she's concerned. Soon after moving into a summer cottage in Tidal, Maine, named for the great wave that swept over it six decades ago, Raleia meets Ian Rutherford, a total recluse since the death of his wife in the catastrophe. For tart tongues and hot tempers, they're a perfect match, but Ian's so much like a living time capsule that Raleia keeps coming back, to probe into his past and dream of days gone by. Despite occasional fits of wisdom, the adults in the story—especially Tiny, who lost her previous baby and is emotionally adrift—are at least as subject to whims and tantrums as the children; consequently, the plot is replete with tears and laughter. Picking up the nuances of character here will require a close, sensitive reading, and some may feel whip-sawed by the many subplots and sudden rages; still, the ability of Raleia and Ian to laugh at themselves keeps them from being complete termagants, and the Pendles in action are a constant delight. (Fiction. 11-13) Read full book review > 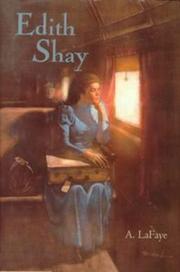 CHILDREN'S
Released: Oct. 1, 1998
EDITH SHAY
by A. LaFaye
CHILDREN'S
Released: Oct. 1, 1998
EDITH SHAY
by A. LaFaye
An abandoned suitcase pushes a Wisconsin farm girl with a yen for travel out of the nest in this bland post_Civil War story from LaFaye (The Year of the Sawdust Man, p. 740). While waiting in a Michigan train station for relatives who never show, Katherine, 16, finds a suitcase belonging to one Edith Shay of Richmond, Virginia, and impulsively buys a one-way ticket to Chicago, intending to see some of the world while returning the bag to its owner. The world she encounters is mostly benign. She has little trouble finding work, lodging, or role models, is never in personal danger, and experiences or witnesses little suffering beyond a robbery (while she sleeps), hard work, and family squabbles. In fact, during her winter-long journey from Chicago to Richmond, with stops in Philadelphia and Washington, D.C., she spends far more time battling homesickness and fretting about her deception (she travels as "Edith") than describing sights or stretching her wings. While readers will relish Katherine's/Edith's colorful way with a phrase, they will have trouble reconciling her independence of spirit with her meek responses to the verbal abuse of her employers, and the ending is weak_the real Edith is dead, with no kin. Katherine walks away, thinking about taking up a career as a travel writer. With so many other fledglings, from Katherine Paterson's Lyddie (1991) to the young artist in Joann Mazzio's Leaving Eldorado (1993), facing first flights over far harsher terrain, this junket seems too easy. (Fiction. 11-13) Read full book review > 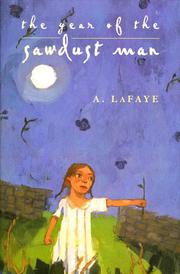 CHILDREN'S
Released: June 1, 1998
THE YEAR OF THE SAWDUST MAN
by A. LaFaye
CHILDREN'S
Released: June 1, 1998
THE YEAR OF THE SAWDUST MAN
by A. LaFaye
Her mother's sudden, wordless departure drives Nissa, 11, into mental instability in this searching, character-driven debut. Moody and flamboyant, Heirah Rae was neither happy nor accepted in tiny Harper, Louisiana, and although she had briefly escaped before, this time it is permanent. Battered by waves of grief, rage, love, longing, and guilt, Nissa becomes even more mercurial than her mother, falling suddenly into screaming tantrums, attacking those around her, twice attempting suicide, all the while trying to understand why Heirah left. Nissa also wonders how her kind, patient, inarticulate father, Ivar, could take up with another woman shortly after Heirah leaves. Readers will find the adult characters' tolerance for Nissa's wild behavior hard to credit, but LaFaye creates a sparky, tough-love friendship between her and her classmate Mary, and through flashbacks makes Heirah's flight—from a life which narrow-minded, small-town gossip and multiple miscarriages had made a living hell—easier to comprehend. Heirah does return, if only to say goodbye, to promise to keep in touch, and to indirectly help Nissa accept her father's remarriage. Even if there is no end to books about shattered families living in small southern towns, LaFaye depicts complex, profoundly disturbed characters with a sure hand, and this turbulent story joins Ruth White's Belle Prater's Boy (1996) as a cut above the rest. (Fiction. 11-15) Read full book review >