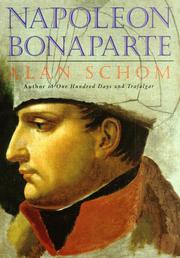 BIOGRAPHY & MEMOIR
Released: Sept. 1, 1997
NAPOLEON BONAPARTE
by Alan Schom
BIOGRAPHY & MEMOIR
Released: Sept. 1, 1997
NAPOLEON BONAPARTE
by Alan Schom
A biography so negative, it even casts doubt on Napoleon's military genius. Historian Schom (Trafalgar, 1990, etc.) breaks no new ground in portraying the man who rose from the impoverished Corsican aristocracy to become emperor of France as a brutal, selfish manipulator who dreamed only of glory and cared little for other people. But even previous biographers who didn't think much of Bonaparte as a human being or a ruler usually conceded that he had no equal on the battlefield. Schom is at pains to refute this notion, beginning with a blistering account of the Egyptian campaign of 179899, during which the French army was decimated due to its general's failure to inform himself about the land he was invading or to properly plan for provisioning his troops, flaws that would have even more tragic consequences in Russia in 1812. The evaluation is so hostile, it's a little hard to understand how Egypt made Napoleon popular enough to sweep into power in November 1799—let alone how he managed to lead the French army triumphantly across most of Europe over the next 13 years. Despite his assertion that he covers ``every aspect of [Napoleon's] life and character,'' Schom severely scants the monarch's sweeping political and social initiatives within France; not even the enduring Napoleonic Code gets much attention. This is old-fashioned narrative history, primarily concerned with personal intrigue among the elite and detailed accounts of battles, and lacking consideration of their broader context. On that limited basis, it's entertaining: vivaciously and rather sloppily written, effectively if not definitively researched (notes refer mostly to published sources rather than archives), with vivid character sketches of all the Bonapartes, the agreeable and promiscuous Josephine, cynical foreign minister Talleyrand, and other key figures. More suitable for those looking for the proverbial ``good read'' than anyone seeking deeper insights into a crucial transitional moment—and man—in French history. (32 pages b&w photos, 20 maps, not seen) Read full book review > 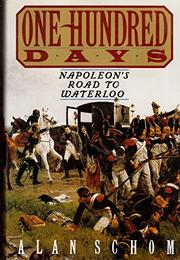 BIOGRAPHY & MEMOIR
Released: Sept. 14, 1992
ONE HUNDRED DAYS: NAPOLEON'S ROAD TO WATERLOO
by Alan Schom
BIOGRAPHY & MEMOIR
Released: Sept. 14, 1992
ONE HUNDRED DAYS: NAPOLEON'S ROAD TO WATERLOO
by Alan Schom
By itself, Napoleon's mid-1815 defeat at Waterloo, barely four months after he had escaped from Elba, was so dramatic that historians often neglect the events leading up to the climactic clash between insurgent French and Allied forces. In the engrossing chronicle at hand, however, Schom (Trafalgar, 1990, etc.) offers a detailed record of the so-called Hundred Days—a period roughly coinciding with Louis XVIII's absence from occupied Paris. Schom is also at pains to dispel any romantic notion that Napoleon was other than a self-absorbed despot whose vaulting ambition cost France dearly. Having landed near Cannes on March 1st, Napoleon moved north on the capital to reclaim his imperial throne. The military apart, precious few Frenchmen welcomed his return. Bled by more than a decade of constant conflict, the country yearned for peace. By the start of June, in fact, the usurper had been obliged to place cities throughout the nation under martial law, leaving him shy of troops to fight against the Anglo-European coalition massing for an invasion along the Belgian frontier. As Schom makes clear, though, Napoleon might well have prevailed in the three-day engagement at Waterloo had it not been for the battlefield insubordination of three senior commanders (marshals Grouch, Ney, and Soult). While the author does a splendid job of recounting the high and low points of Napoleon's second coming, his lively narrative's real power derives from the human-scale perspectives provided by incisive profiles of the emperor's friends, foes, and family. Schom includes finely etched portraits of, among other colorful characters, Klucher, Carnot, FouchÇ, Napoleon's four brothers, Talleyrand, and the Duke of Wellington. A master annalist's vivid reconstruction of a turning-point in world history. (Eight pages of illustrations—not seen.) Read full book review >

TRAFALGAR: COUNTDOWN TO BATTLE 1803-1805
by
Admiral Horatio Nelson's victory at Trafalgar over a combined Franco-Spanish fleet in October 1805 was so dramatic in itself that historians have often given short shrift to the events surrounding the battle. In this riveting narrative, Schom (Emile Zola, 1988) seeks to rectify this imbalance, viewing the contest as only the climax of a two-year campaign to stymie a French invasion. In 1803, Napoleon embarked on feverish preparations for crossing the English Channel with the largest armada ever seen in Europe. Weakened by the alcoholism that would claim his life within two years, William Pitt the Younger returned to power as Britain's prime minister, rallying his countrymen and revitalizing the demoralized Royal Navy. Schom soundly analyzes logistical factors underlying these two implacable foes' cat-and-mouse games, but his real talents are for exhaustive research, finely etched characterization, and eye for detail (including two pageantry-filled set pieces that frame the narrative: Napoleon's crowning as Emperor in 1804 and Nelson's funeral in January 1806). Among the vivid personalities here are energetic French Naval Minister Denis Decres, desperately trying to meet the demanding Napoleon's unrealistic shipbuilding schedules; Pitt loyalist Viscount Melville, forced at the height of the crisis to relinquish his post as First Lord of the Admiralty because of jealous political opponents; and Sir William Cornwallis, whose Channel Fleet masterfully blockaded Napoleon for more than two years, and who, Schom believes, should receive more recognition for astutely dispatching the fleet that helped Nelson win. However, it is still the dynamic Nelson—relentlessly pursuing the French quarry across the Atlantic and back, dying just after learning his fleet had carried the day—who remains the first among equals in this teeming ensemble of British, French, and Spanish heroes and villains. Lively, dramatic, and reminiscent of two other vibrant narratives of decisive naval engagements: Jack Beeching's The Galleys at Lepanto (1983) and Garrett Mattingly's The Armada (1959). Read full book review >