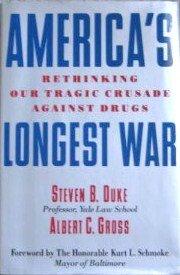 NONFICTION
Released: Feb. 7, 1994
AMERICA'S LONGEST WAR: RETHINKING OUR TRAGIC CRUSADE AGAINST DRUGS
by Steven B. Duke, Albert C. Gross
NONFICTION
Released: Feb. 7, 1994
AMERICA'S LONGEST WAR: RETHINKING OUR TRAGIC CRUSADE AGAINST DRUGS
by Steven B. Duke, Albert C. Gross
A harshly critical but trenchant look at the war on drugs, the ``failure'' of which leads the authors to propose realistic, achievable solutions that go beyond mere legalization. Duke (Law/Yale) and Gross, a California attorney, urge that drug abuse be viewed as a health problem, not a criminal one. While $50 billion is spent annually on the drug war, criminal sanctions, it seems, only increase the profits for the dealers. By Duke and Gross's reckoning, the ``enormous costs of criminalization''—in money, resources, lives, social well-being, and the growing curtailment of civil liberties—``are not remotely justified.'' Examining the history of drug use in the US, and citing proponents of legalization from conservative William F. Buckley, Jr., to the Libertarian Party, the authors conclude that ``regulated legalization'' should be federally mandated, in stages, beginning with marijuana, cocaine, and heroin. They believe use should be permitted not only in the privacy of the home but in a number of public places to avoid concentrated neighborhood impact. Juvenile access would be curbed, they contend, by strong enforcement of the alcohol and tobacco laws already in place. Commercially licensed, drug distribution and manufacture would be regulated much as liquor sales and gambling are now. Meanwhile, advertising would be banned from the airwaves, and packaging would be generic, without alluring claims. Drugs, then, could be dispensed without the attendant dangers and suffering now associated with their use. There would still be abuse, but addicts who now take to the streets and become involved in a wide range of criminal activity would have alternatives for safe sources and treatments. Buy it all, or a portion: a humane, common-sense approach ``designed to minimize the harm'' of inevitable drug usage. Read full book review >