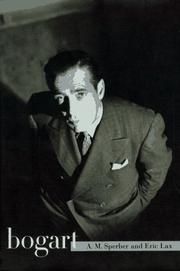 BIOGRAPHY & MEMOIR
Released: April 1, 1997
BOGART
by A.M. Sperber, Eric Lax
BIOGRAPHY & MEMOIR
Released: April 1, 1997
BOGART
by A.M. Sperber, Eric Lax
Two celebrated biographers lend their diligence to this dense, insightful work on a much analyzed icon. Sperber (Murrow: His Life and Times, 1986) had spent seven years researching and completing a manuscript when she died in 1994; Lax (Woody Allen: A Biography, 1991, etc.) picked up where she left off. The resulting book is strong on original research (drawing on interviews with nearly 200 people, on film archives, and on Bogart's FBI file) and refreshingly free of worn Hollywood anecdotes and tired film analysis. Among other things, it reveals the depths of of imbalance in Bogart's seemingly successful family (his parents, a physician and an artist, were alcoholics, emotionally remote and violent-tempered), the excruciatingly long road to stardom at Warner Brothers (``even in A pictures, Bogart wound up in B roles'' early on), and the self-recrimination that followed his public apology for his political activity at the HUAC hearings. (The re-creation of red-scare fear in Hollywood is especially clear and full.) The reasons for Bogie's first two marriages are examined in depth (his first, brief marriage, to successful actress Helen Menken, appears to have been in part to advance his career), as is the sense of duty that tied him to third wife Mayo Methot after he fell in love with Lauren Bacall. Sperber and Lax need no devices (such as Jeffrey Meyers's parallel between Bogart and Hemingway, see p. 281) to define the actor. Here Bogart's words and actions explain him, revealing his psychology and his place in American popular culture. When he tells a friend that he chronically berates himself because ``I expected a lot more from me. And I'm never going to get it,'' he encapsulates his own outlook and screen persona, as well as the national self-doubt that was key to his success. Dramatic, historically informative, and elegiac, this exemplifies an honorable standard in the uneven world of film biographies. (40 b&w photos, not seen) (Author tour) Read full book review >