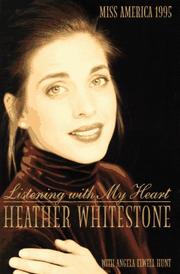 NON-FICTION
Released: June 1, 1997
LISTENING WITH MY HEART
by Heather Whitestone, Angela Elwell Hunt
NON-FICTION
Released: June 1, 1997
LISTENING WITH MY HEART
by Heather Whitestone, Angela Elwell Hunt
Miss America of 1995, profoundly deaf since she was a toddler, reveals how she claimed the tiara. Now a motivational speaker, the Alabama-born Whitestone dedicates this book to her ``Heavenly Father,'' with thanks for ``the joys, the trials, and the uphill path.'' Whitestone did have an uphill path. Her deafness came as a result of treatment for a life-threatening illness when she was only 18 months old. As with so many people who push beyond what professionals predict are the limits of their disabilities, Whitestone had caretakers- -in this case, her parents—who believed that she could learn to talk and to function in the ``real'' world. Her parents chose to have Whitestone learn to speak, as opposed to using only sign language and lip-reading to communicate. The long hours of study and practice—over and above schoolwork—were frustrating, but Whitestone found an outlet in learning ballet. That was the talent that carried her through years of pageants, beginning with the Shelby County Junior Miss program, when she was a moody, angry high school senior. As second runner-up, she came home with $1,400 in college scholarship money and rising self-esteem. On track to the Miss America competition, she entered the Miss Alabama contest three times, scoring at last in 1995 and moving on to Atlantic City to walk the famous walk as Miss America. Whitestone describes the year of her reign—an exhausting, enervating, frustrating year, but one also devoted to furthering deaf causes (such as early diagnosis) and encouraging deaf children. Most demoralizing was the reaction of the deaf community to their new queen; some people were proud, but others were publicly indignant that Heather spoke rather than signed. A simple story, simply told, with the emphasis on hard work, concentration, and trust in God. (15 illustrations, not seen) (Author tour) Read full book review >