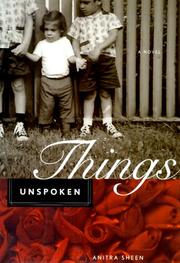 FICTION & LITERATURE
Released: June 1, 1999
THINGS UNSPOKEN
by Anitra Sheen
FICTION & LITERATURE
Released: June 1, 1999
THINGS UNSPOKEN
by Anitra Sheen
After a lazy, drifting start, Sheen's first novel proves to be a modest drama about the slow disintegration of a Los Angeles family through the 1950s and "60s. Narrated by young Jorie MacKinnon, the story opens as her household settles down in the aftermath of her mother's early death. The beginning chapters depict Jorie's girlhood, her twin brothers, Jimmy and Alex, and their distant, coolly unemotional but loyal father, Dr. Tom MacKinnon. Many of the anecdotes are simply scenes united by conjunctions (Dad's away at work too much, the boys are always in trouble) that drift helplessly across the page. The four take a trip to Canada, Dr. MacKinnon's boyhood home, where Jorie's father and grandfather are stiffly reunited and the death of Tom's brother is recounted to no particular effect. The MacKinnons acquire a dog, named Sleepwalker for his unfortunate habit of unconsciously terrorizing the neighborhood at night. Alex and Tom are forced to shoot him; the reader presumes this has some traumatic effect on the children, but it is largely unexplored. Things heat up when Jorie discovers that her father has other children by other women, that he sends support payments to them, and that he is somehow connected to the Mob. In the wake of this crisis, Tom has a heart attack, and Jorie, just 15, begins a surprisingly satisfying love affair with his cardiologist. Tom's medical practice suffers, and he becomes addicted to morphine. Finally, bad investments in oil wells and chinchilla farms sink the family fortunes, and after Tom's death by overdose, Jimmy heads for Viet Nam, Alex leaves to play piano in a group, and Jorie bravely strikes out on her own. The absence of telling observations, an incisive grasp of events, or a notable style robs the story of narrative sparkle: it floats slowly to the reader's lap in shades of melancholy blue and indifferent gray. Read full book review >