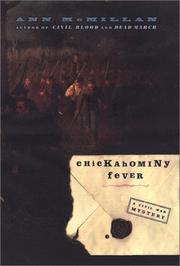 FICTION & LITERATURE
Released: April 3, 2003
CHICKAHOMINY FEVER
by Ann McMillan
FICTION & LITERATURE
Released: April 3, 2003
CHICKAHOMINY FEVER
by Ann McMillan
"A gruesome look at health care, Civil War-style, and the moral offenses partisans can embrace in defense of the highest ideals."
Virtually everyone in Richmond, Virginia, is aware of spinster Louisa Ferncliff's abolitionist sympathies, but few know that her black housekeeper, Selah, is her half-sister, or that she has insinuated Suzy, her other half-sister, into Jefferson Davis's household as a Union spy. But when Suzy steals an important message guaranteed to shorten the war, Louisa refuses to pass it on. What good would it do, she reasons, to end the hostilities before the slavery issue is resolved? Meanwhile, over at Chimborazo Hospital, nursing volunteer Narcissa Powers (Civil Blood, 2001, etc.) is dismayed on two accounts: that a boozy doctor has banished her friend Annie from the premises for stealing morphine, and that a Confederate soldier Annie's been nursing has been malingering—and then disappears. Soon enough, Suzy steals away as well, while bits of a quilt indicating slave movements pop up on a black child abandoned in a cemetery near Louisa's house. As Narcissa struggles with fever and hallucinations caused by bouts with malaria that are abated only by the ministrations of black "doctoress" Judah Daniel, the battle for control of Richmond heats up, leading to pandemonium—and murder—in Louisa's household, death for poor Annie, grieving for her husband, and the reappearance of both the absconders. Read full book review > 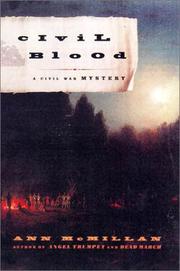 FICTION & LITERATURE
Released: July 1, 2001
CIVIL BLOOD
by Ann McMillan
FICTION & LITERATURE
Released: July 1, 2001
CIVIL BLOOD
by Ann McMillan
"Despite the strain of juggling a large cast, many with little to do but cower fearfully, McMillan manages another powerful portrait of women fighting the hardest battles of all."
Nothing could seem more cryptic than the answer Major Josiah Harrald makes to wartime nurse Narcissa Powers's question about his Confederate officer's coat: "Stolen. Cats. Came in the window." Properly interpreted, however, Harrald's dying speech is terrifying. His coat, its pocket fat with bills, has been taken by some boys belonging to one of Richmond's rival neighborhood youth gangs—the Butcher Cats or the Shockoe Hill Cats—too young, too ignorant, or too desperate to care that the garment and the money are infected with the smallpox that killed Harrald. What's become of the Cats who vanished into the city's depths, or the mysterious woman who visited Harrald shortly before his death? The frantic attempts of Narcissa and conjure woman Judah Daniel to protect the town from a danger far more deadly than all the Union guns are thwarted by a killer who seems to be stalking everyone who's seen the fatal coat; by would-be hospital patron Roland Ragsdale, a wealthy speculator whose interest in gambling and women clearly indicates that he's up to no good; by the byways of the contagion, which lead Narcissa to matters and people no gentlewoman should ever know; and by McMillan's apparent determination to find roles for all the continuing characters of her Civil War saga (Angel Trumpet, 1999, etc.) in this third installment. Read full book review > 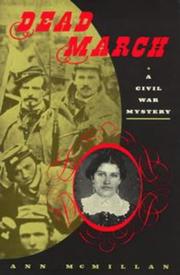 FICTION & LITERATURE
Released: Sept. 1, 1998
DEAD MARCH
by Ann McMillan
FICTION & LITERATURE
Released: Sept. 1, 1998
DEAD MARCH
by Ann McMillan
On the eve of Virginia's nervous preparations to join the Confederacy, Charley Wilson, a Richmond medical student pressed into service as a grave robber in order to satisfy Hampden-Sydney's need for anatomical specimens, sees that the latest corpse his little group has dug up did not go gently into that good night. The young black woman, allegedly a slave who died of childbed fever, has been buried without the baby who supposedly killed her but with a strangling strip of cloth jammed down her throat. Eager to confide the grisly discovery to his widowed sister, Narcissa Powers, Charley begins a letter to her, but before he can send it, he's struck down by a fatal case of erysipelas, and Narcissa arrives at his side just in time to hear him utter a single word, "resurrection," before he dies. What further knowledge did Charley take to his grave? Why have the other "sack-'em-up men" in the nocturnal party suddenly started to suffer the same fate as the woman they exhumed? And what can Narcissa, condemned to idealized inactivity as the flower of southern womanhood, do about it? Joining forces with two equally determined women—her sister-in-law Mirrie Powers and free black conjure woman Judah Daniel—Narcissa struggles to learn the truth about this corpse before the battle of First Manassas provides Hampden-Sydney with thousands of replacements. Historian McMillan's first novel is a rewarding period piece that mixes decorous tableaux out of Margaret Mitchell with unflinching glimpses of slavery, surgery, and the horrors of war and sudden death. Read full book review >