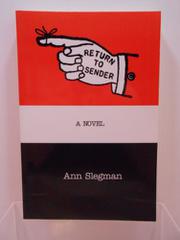 FICTION & LITERATURE
Released: April 15, 1995
RETURN TO SENDER
by Ann Slegman
FICTION & LITERATURE
Released: April 15, 1995
RETURN TO SENDER
by Ann Slegman
First-novelist Slegman, a former McCall's editor, makes tabloid headlines the stuff of inspiration—here, in a sometimes strained chronicle of surviving a dysfunctional family with the help of a starstruck grandmother. Set in the Kansas City of the 1960s and '70s, with period details kept refreshingly unobtrusive, the story celebrates the rocky growing-up of Roxanne, who, even at ten, ``had always had a deep and abiding belief that some day her life would be normal.'' This belief, however, is tested not only by the realities of her childhood but by the further traumas of adolescence. Roxanne remembers a childhood in which her mother, Emma, was usually ``doing one of two things—vacuuming or napping.'' Meanwhile, as father James daydreamed of something better than the present state of his marriage, it was Gramma who ran the household. Admired ``not only for her point of view...but for her eccentricities as well,'' Gramma tried to rear Roxanne and her younger brother, Gus, with a mix of intuition and aphorisms gleaned from her close reading of movie magazines. Later, the family's fragility is further threatened when James attempts suicide, then heads out to Esalen to find himself but instead meets Lydia, with whom he begins an affair. Gramma doesn't mind, as long as James stays with the family. But the affair has fatal consequences: James dies; Emma breaks down and has to be permanently hospitalized; 14-year-old Gus runs away to California, where he ends up living with wealthy, gay Fred; and Gramma and Roxanne—by now l6 and in the midst of a difficult adolescence—try to survive. Which they do, more or less. And when Gramma dies about the same time as her adored Elvis, her funeral becomes a celebration and an occasion for hope. A promising debut, with a terrific cast of strong and likably eccentric characters, that on balance tries too hard to make us laugh—and cry. Read full book review >