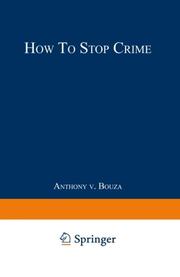 NON-FICTION
Released: April 1, 1993
HOW TO STOP CRIME
by Anthony V. Bouza
NON-FICTION
Released: April 1, 1993
HOW TO STOP CRIME
by Anthony V. Bouza
An exhaustive, brash, and perceptive analysis of America's crime problem—to which former Bronx police chief Bouza offers remarkably common-sense solutions. Bouza's examination of the all-too familiar statistics of murder, rape, assault, and other violent crimes cuts past the usual rhetoric to what he states is the core issue: that the nation's ``failure to address poverty and racism'' has led to the proliferation of drugs and increasingly violent levels of street crime. As he sorts through the numbers—nearly 24,000 murders annually (far more, he notes, than the country would accept in a war); 25% of the nation's households victimized in 1991 by a rape, robbery, assault, burglary, or auto theft—he contends that, even though most street crime happens to blacks, it's black-on-white violence that gets media attention, pandering ``to our basest instincts.'' Most proposed solutions have been ``sexy,'' politically expedient ones: more cops and jails, stiffer penalties, the ``war'' on drugs. Bouza suggests both short- and long-term solutions that embrace tough penalties for tough criminals but that also include a national preventative strategy of treatment, training, and encouragement. He calls also for a presidential commission on crime that would recognize poverty and racism as the roots of the problem. Bouza states, however, that criminals acting from compulsion—child molesters, rapists, serial killers—are poor risks and should ``be warehoused.'' He doesn't preclude castration for offenders, and he believes that insanity pleas should be more strictly limited. Meanwhile, the policies and platforms of both national parties are, he says, little more than ``quick fixes.'' Overlong and repetitious, but, still, an important document that sweeps aside the empty words and emotionalism that have blocked progress in reducing crime. Read full book review >