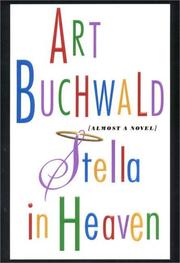 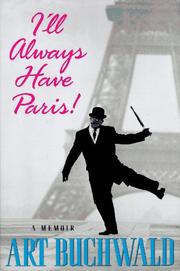 BIOGRAPHY & MEMOIR
Released: Sept. 4, 1996
I'LL ALWAYS HAVE PARIS!: A MEMOIR
by Art Buchwald
BIOGRAPHY & MEMOIR
Released: Sept. 4, 1996
I'LL ALWAYS HAVE PARIS!: A MEMOIR
by Art Buchwald
Raconteur Buchwald (Leaving Home, 1993, etc.) checks in with the second installment of his memoirs. It's full of lively anecdotes, and dropped names are as plentiful as autumn leaves in the Bois de Boulogne. Picking up the narrative where Leaving Home left off, Buchwald blithely relates what happened after he landed, in 1948, what may have been the world's greatest postwar job: writing for the Herald Tribune in Paris. As an entertainment columnist and food critic for the paper, Buchwald got to know, close up, corporate bigwigs, politicians, showbiz luminaries, and other assorted stars of the International Set. While he was earning $25 a week, young Art hobnobbed with the likes of Truman Capote and Elvis Presley, Thornton Wilder and J. Paul Getty. He did a one-night stand as a waiter at Maxim's. He crashed fancy dress balls. He helped further Prince Rainier's courtship of Grace Kelly, and he mediated (with hilarious results) a dispute between the Greek magnates Onassis and Niarchos. He challenged Rex Harrison (who had taken umbrage at one of his columns) to a duel. (Harrison didn't show.) By dint of sincere application and a droll gift for puncturing pomposity wherever he found it, he rose to the position of bon vivant wonderfully. Even better, he found and married the redoubtable Ann, and they in turn adopted three children. Ultimately, though, the high life took its toll; there was a struggle with depression and a period of separation from Ann. On the whole, however, the memoir is about the fun and romance of a now vanished time. ``All of my writing since,'' Buchwald notes, ``has been the result of my landing that job on the Trib.'' While this current installment is not as Dickensian as the widely praised Leaving Home, Buchwald's self-deprecating wit is in full display. Some stories are unabashedly sentimental; all are entertaining. Paris never looked better. (First printing of 100,000; $100,000 ad/promo; author tour) Read full book review >

BIOGRAPHY & MEMOIR
Released: Jan. 12, 1994
LEAVING HOME: A MEMOIR
by Art Buchwald
BIOGRAPHY & MEMOIR
Released: Jan. 12, 1994
LEAVING HOME: A MEMOIR
by Art Buchwald
Humorist Buchwald turns serious, albeit not wholly so, in this affecting memoir of his painful youth and early manhood. Shortly after she bore him in 1925, Buchwald's emigrant mother was committed to a psychiatric institution, where she was to spend the rest of her life. The author's father, an impoverished draper, couldn't afford to make a home for young Art and his three older sisters, so the children shuttled about N.Y.C.'s foster-care system for most of the Depression. Finally, in 1939, Buchwald päre was able to reunite the family in a Queens apartment. In the meantime, however, his son had developed a fiddlefoot, the soul of a hustler, and a rich fantasy life. WW II gave him a chance to leave a hurtful past behind, and he took it, lying about his age to enlist in the Marines. After returning unscathed from the Pacific (where he served as an ordnance specialist in a fighter squadron), Sgt. Buchwald took his discharge and used the GI Bill to enroll at USC. Despite discovering that he lacked a high-school diploma, the university allowed him to attend classes as a special student. But after three fulfilling years there, Buchwald learned that his government stipend could be used to study in Paris. He transferred almost immediately and found the City of Light much to his liking. In relatively short order, he gained employment as a Variety stringer and convinced a Herald Tribune editor to let him write a column for $25 a week. At the close of this memoir, he's typing ``Paris After Dark'' by Art Buchwald.... An often brutally frank account in which Buchwald reveals an affecting capacity for reflection without lapsing into pathos or losing the light touch that's gained him fame and fortune. The rest of the story can't come soon enough. (First serial to Parade) Read full book review > 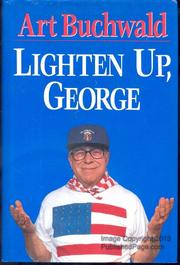 BIOGRAPHY & MEMOIR
Released: Nov. 7, 1991
LIGHTEN UP, GEORGE
by Art Buchwald
BIOGRAPHY & MEMOIR
Released: Nov. 7, 1991
LIGHTEN UP, GEORGE
by Art Buchwald
The copy on Buchwald's latest column collection describes him as ``a syndicated columnist, a lecturer, a Pulitzer Prize winner and a plaintiff.'' None of the 157 columns (1989-91) reprinted here goes into the popular pundit's celebrated court case against Eddie Murphy and the Coming to America profits, but Buchwald covers just about every other timely topic (most broached, as usual, in a short fantasy scenario)—from the hidden benefits of smoking (``Nonsmokers...live too long, and to this day they are a tremendous drain on the country's resources'') to Soviet food shortages (a scenario in which Gorbachev gives up USSR conventional forces in Europe in exchange for ten thousand Dairy Queens and ``every Dunkin' Donuts east of the Mississippi'') and the S&L scandal (which finds Buchwald using an oxygen mask to climb a mountain of junk bonds—but ``you can never say that you have reached the summit of an S&L debt, because tomorrow it's bound to be higher''). So: more bright whimsy, bound to please; and for those concerned about the ill-effects of Buchwald's barbs, please note his promise that ``if anyone objects to the material in this book, I will happily retract it.'' Read full book review >