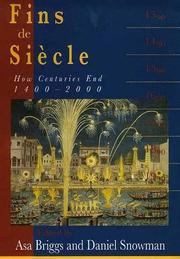 HISTORY
Released: Jan. 15, 1997
FINS DE SIÈCLE: HOW CENTURIES END, 1400-2000
edited by Asa Briggs, Daniel Snowman
HISTORY
Released: Jan. 15, 1997
FINS DE SIÈCLE: HOW CENTURIES END, 1400-2000
edited by Asa Briggs, Daniel Snowman
A fascinating and generally informative romp through the closing decades of each of the past five centuries and our own. Briggs, a veteran academic historian, and Snowman, a former BBC producer and the author of works on social and cultural history, have recruited five British colleagues (their book originated as a BBC series) to cover the political, social, economic, and cultural elements of life in Great Britain at each century's end. (Unfortunately, there is next to nothing on the rest of the world.) The best chapter by far is Peter Earle's ``Finance, Fashion, and Frivolity,'' on the 1690s, a bustling, hustling decade that (rather like the 1980s) was characterized by the ``praise of luxuries and prodigality'' and that witnessed the introduction of lotteries, the beginning of modern statistics, the creation of the London stock exchange, and the invention of the ``easy chair.'' The weakest chapter is Briggs's, on the 1990s. He spends too much time on British politics, and on a rather tedious response to Francis Fukuyama's already-dated 1989 essay ``The End of History,'' so that such important late-20th-century developments as the recrudescence of feminism receive short shrift. In fairness however, it should be added that Briggs does contribute a superb perspective on late Victorianism in his chapter on the 1890s. Because these chapters are meant to provide a broad overview, much is, of necessity, left out. For example, while Roy Porter's review of the 1790s includes a good discussion of the impact of the French Revolution on England (particularly on writers and philosophers), the reader learns almost nothing about the effects on Britain of the loss of the American colonies. This is, nonetheless, a consistently well-written, assured work, offering a lively popular history greatly enhanced by over 100 illustrations (33 in color). Read full book review >