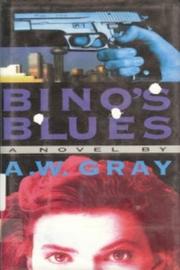 MYSTERY THRILLER
Released: April 1, 1995
BINO'S BLUES
by A.W. Gray
MYSTERY THRILLER
Released: April 1, 1995
BINO'S BLUES
by A.W. Gray
We interrupt this Dallas police corruption trial—in which Rusty Benson's client, Capt. Terry Nolby, has just indicated that he'll roll over on Bino Phillips's client, Lt. Tommy Clinger—for a special announcement: Counselor Benson's Eldorado has just been fished out of the Houston shipping channel with his estranged wife Rhonda inside. Looks like Rusty's in for a tour, up close and personal, of the Houston penal facilities; looks like Bino's elected to handle the bail hearing; looks like a few nights in the cooler have Rusty ready to roll over himself and tell everything he knows—and maybe some stuff he doesn't—to the hungry federal prosecutors who can already taste those pan-fried Dallas bluecoats and the mysterious higher-ups who are pulling their strings and taking the cuts from their payoffs. All this matey dealmaking leaves Bino (Bino, 1988; Killings, 1993) odd man out, with nobody in his corner as he hunts the hit-man who killed Rhonda Benson (a federally protected witness, natch) but the nearsighted torch singer who picked him up—and even she's secretly a federal snitch. A fast-paced, fragrant, nothing-personal exposÇ that'll leave you wondering which is the lower form of life: those nasty feds or the mean-eyed morons employed to enforce the laws of the great state of Texas. Read full book review > 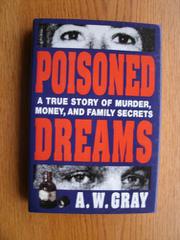 NON-FICTION
Released: Dec. 6, 1993
POISONED DREAMS: A TRUE STORY OF MURDER, MONEY, AND FAMILY SECRETS
by A.W. Gray
NON-FICTION
Released: Dec. 6, 1993
POISONED DREAMS: A TRUE STORY OF MURDER, MONEY, AND FAMILY SECRETS
by A.W. Gray
The fatal poisoning in 1991 of Dallas socialite Nancy Lyon has all the ingredients for a solid true-crimer: big money; a philandering husband; incest; ambiguous evidence; courtroom drama. But rather than offer a straightforward rendering, mystery writer Gray (Killings, p. 687, etc.) contrives needless suspense and melodrama to tell the tale. Nancy, daughter of a powerful Texas family, was a successful landscape architect, but her marriage to landscape-developer Richard was troubled—not least by revelations of her teenage incest with her brother (incest, Gray hints, that continued into adulthood). When Nancy and Richard separated, the woman seemed to fall apart, suffering numerous illnesses, losing weight, and even dyeing her hair as blond as that of Richard's girlfriend. Moreover, Nancy allegedly spoke of attempts by Richard to poison her, like the time at the movies when she got sick from a soft drink he'd brought her. Later, she became violently ill and was hospitalized until, six days later, she died—and Richard was arrested on murder charges and brought to trial. There, his defense attorney suggested that, if Nancy had indeed been poisoned, the poisoning was simply the desperate act of a woman trying to get attention. In order to reconstruct the case, Gray resorts to speculation and outright (if admitted) invention. He suggests that Nancy's powerful family, suspicious of Richard, may have pressured police for advice on handling a potentially incriminating wine bottle and other ``evidence.'' He makes up conversations and contends that the activities of Nancy's physician ``were choreographed as if he spent the entire day thinking of ways to make his future testimony admissible'': This was the same M.D. who, although testifying that Nancy had told him ``everything,'' failed to prescribe poison treatment or to expedite her blood-screening. Richard was found guilty and is serving life behind bars—but the evidence in the case, confounding and contradictory, is hardly clarified by Gray's often melodramatic treatment. (Eight pages of b&w photographs—not seen) Read full book review > 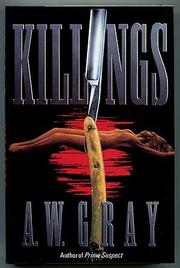 MYSTERY THRILLER
Released: Aug. 5, 1993
KILLINGS
by A.W. Gray
MYSTERY THRILLER
Released: Aug. 5, 1993
KILLINGS
by A.W. Gray
White-haired, wild-eyed defender Bino Phillips (Bino, 1988) has pinned his hopes of getting coked-up football player Mickey Stanley acquitted of serious dealing on two witnesses—but one of them is dead, her body half drained of blood, and now the other has gone missing. So Bino and his redoubtable office staff (secretary Dodie Peterson, investigator/bookie Half-a-Point Harrison) get sucked into the hunt for the schizo that fatheaded FBI man Nelson Deletay (who goes around telling people The Silence of the Lambs was based on his work) calls Dracula Don. But by the time they sort out the reluctant witnesses to Don's next killing—Oscar Beemish, the Egg Roll Wizard from Detroit, and Rascal Erly, ``not quite a street person''—Don, driven by voices, has staked out Dodie's place, convinced that uniting with her will confirm his status as the Messiah. Creepy, funny, and sick, with as much tension as a high-wire walk on a high-voltage wire. Shove over, Elmore Leonard. Read full book review > 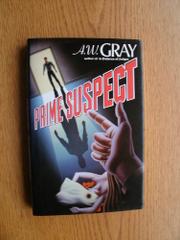 Released: July 10, 1992
PRIME SUSPECT
by A.W. Gray
Released: July 10, 1992
PRIME SUSPECT
by A.W. Gray
Lackey Ferguson, part-owner of F&F Construction, a small company that hires parolees as laborers, doesn't realize he's being set up as fall-guy when Percy Hardin, from the posh side of town, invites him over to discuss building a poolhouse for his wife, Marissa, then leaves Lackey alone with her. When Marissa is raped and murdered and Percy has an airtight alibi, Lackey becomes the prime suspect—even though forensics can't match his pubic hair and semen to that found at the scene (facts that the cops, eager for a ``quick solve,'' are willing to ignore). So Lackey begins his own investigation, which leads to the death of a parolee/employee and the abduction of his fiancÇe, Nancy. Meanwhile, the killer Percy hired has his own agenda—getting Percy to pay up, which he can't do until the insurance comes through. Several gruesome deaths later, the killer is cooing over Nancy in his hide-out; Percy and his sister-in-law are arguing in bed; and Lackey is on the run from the cops and in search of Nancy.... As Gray proved in Bino and Size, he can out-tough the best of them, even Elmore Leonard. This is less complex than its predecessors, but, still, sharp, taut, and mean. Read full book review > 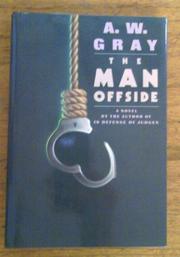 MYSTERY THRILLER
Released: June 25, 1991
THE MAN OFFSIDE
by A.W. Gray
MYSTERY THRILLER
Released: June 25, 1991
THE MAN OFFSIDE
by A.W. Gray
Texas chronicler Gray (Bino, Size) now presents antihero Rick Bannion—an ex-Dallas Cowboy and ex-framed con who for years has had an off-and-on affair with Donna, the wife of his former Dallas teammate Jack Brendy. Can Rick, Donna asks, get Jack clear of a cocaine trafficking charge? Sure—but then Jack's gunned down on the courthouse steps; X-rated pictures of him and a murdered stripper turn up; Muhammed Double-X and his goons are involved up to their diamond cufflinks and mirrored shades; the FBI, the DEA, and the Dallas cops are all leaning on Rick; and Jack's lawyer, Cassel, is in a shady partnership with a mystery man who orders Donna killed. Although savvy readers will identify the bad guy midway through, this Dallas version of Boston's The Friends of Eddie Coyle has memorable characters (including Plates, the small-time forger; and the darkly drawn Breaux, Rick's former cellmate) and punchy, side-of-the-mouth dialogue—adding all the more muscle to Gray's hard-boiled rep. Read full book review >