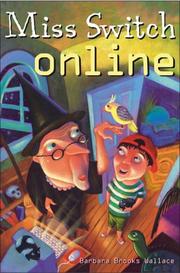 CHILDREN'S
Released: June 1, 2002
MISS SWITCH ONLINE
by Barbara Brooks Wallace
CHILDREN'S
Released: June 1, 2002
MISS SWITCH ONLINE
by Barbara Brooks Wallace
Wallace is just treading water in this roughed-out reprise of The Trouble with Miss Switch (1971) and Miss Switch to the Rescue (1981). Once again, evil witch Saturna has nefarious plans for science whiz Rupert P. Brown and his Pepperdine Elementary classmates. This time she places her vacuous but supernally handsome brother Grodark and Neptuna, another witch, into the Principal's office—but, as usual, irascible rival Sabbatina Switch is on the case, and the baddies find all of their spells fizzling as soon as cast. Shoehorning computers and email into the tale without much understanding of how they actually work, the author concocts a series of situations involving talking pets, midnight classroom meetings, obscure clues in bad verse and quick, thousand-mile broom rides. But even readers willing to enjoy these crowd-pleasing elements without minding their contrivance are likely to be disappointed to see Rupert and friends doing little here beyond watching from the sidelines, worrying, and being briefly victimized by harmlessly prankish spells. A clumsy updating. (Fiction. 9-11)Read full book review > 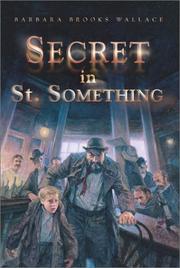 CHILDREN'S
Released: June 1, 2001
SECRET IN ST. SOMETHING
by Barbara Brooks Wallace
CHILDREN'S
Released: June 1, 2001
SECRET IN ST. SOMETHING
by Barbara Brooks Wallace
Positively Dickensian in its melodramatic twists and turns, but not in its length, Wallace's (Ghosts in the Gallery, 2000, etc.) latest page-turner grabs and holds attention. Robin, a slight nine, fears and dreads his stepfather, who beats him and sends him out to collect rents from the miserable New York City tenements they inhabit. When the drunk and loutish Doaks threatens Robin's baby brother Danny, however, Robin screws up his courage and takes all their clothing, as much milk as he can carry, and a locket from Doaks's stash of pilfered goods and he runs away with Danny. But what to do? He already knows the taverns, workhouses, and alleys are no place for himself, let alone a baby. Creeping into a church cellar, he finds as neat a pack of lost boys as ever populated a story. Spider, Duck, Piggy, and Mouse, who survive by their wits and shoe-shining, take Robin into their band, teach him their trade, and leave the crippled Piggy as babysitter. Robin in turn begins to teach them to sew (which he learned from his mama) and to read. But Doaks hasn't given up on finding Robin, and Robin doesn't feel at all safe or sure. A thrilling dénouement involves deathbed confessions, that purloined locket, and an incredibly joyous ending for Robin and the boys. (Fiction. 10-14)Read full book review > 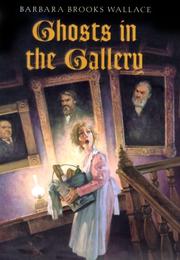 CHILDREN'S
Released: June 1, 2000
GHOSTS IN THE GALLERY
by Barbara Brooks Wallace
CHILDREN'S
Released: June 1, 2000
GHOSTS IN THE GALLERY
by Barbara Brooks Wallace
Ghosts are the least of Jenny's problems. Newly orphaned, she has traveled from China to the East Coast of the US to live with a grandfather she has never met. Instead of a warm welcome and a life of wealth and ease, she is condemned to a dark cellar room and a servant's existence. As she learns to cope with endless backbreaking tasks, she also comes to realize that first impressions are rarely accurate. The new people in her life, both "upstairs and downstairs," display their true colors one clue at a time. Who is a friend? Who is an enemy? Seemingly benign behavior may mask evil. Cruelty may be a protective device. There is danger and treachery before all is revealed. Wallace (Sparrows in the Scullery, 1997, etc.) has incorporated all the expected elements of the Victorian Gothic: an orphan, a gloomy mansion, a secret will, false identities, and a cast of sinister and mysterious characters. There is also a deft use of language that hints at the syntax of the 19th century. Descriptions of clothing and furnishings, as well as the minutiae of daily life, draw the reader a picture of time and place and atmosphere that is nearly perfect. Sure to be a hit. (Fiction. 8-11)Read full book review > 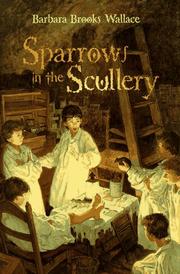 CHILDREN'S
Released: Oct. 1, 1997
SPARROWS IN THE SCULLERY
by Barbara Brooks Wallace
CHILDREN'S
Released: Oct. 1, 1997
SPARROWS IN THE SCULLERY
by Barbara Brooks Wallace
Wallace (Cousins in the Castle, 1996, etc.) transports readers back to 19th-century England, to the time when it was not uncommon for orphans to be sold to seemingly charitable homes where they were clothed and fed, but where they were often required to toil long hours in factories. That's the horror that befalls once privileged, recently orphaned Colley Trevelyan, 11. The action takes off at a horse's gallop: After his parents are killed in a carriage accident, Colley is kidnapped and sold to the Broggin Home for Boys. There he is stripped of his name and put to work in a glass factory. It's a far cry from the servants and estate to which he's accustomed, but Colley becomes close to the other boys, and learns about friendship, teamwork, and survival. Wallace is deliberately Dickensian in her portrait of the home and the boys, yet the tale is full of hope: The boys find an unexpected savior, and readers will be borne along by the suspense to an exhilarating conclusion. (Fiction. 8-12) Read full book review >

ADVENTURE
Released: April 1, 1996
COUSINS IN THE CASTLE
by Barbara Brooks Wallace
ADVENTURE
Released: April 1, 1996
COUSINS IN THE CASTLE
by Barbara Brooks Wallace
An orphan is abandoned, robbed, and kidnapped in a Victorian melodrama from Wallace (The Twin in the Tavern, 1993, etc.), a specialist in the genre. When motherless Amelia's father is reportedly killed while abroad, she is forced to leave London to sail to America with her forbidding Aunt Charlotte. Upon arriving in New York, Amelia is beset by troubles and seeks help from the only person she knows, Primrose, a child singer she met on the ship. This is good entertainment, with all of melodrama's blandishments: an innocent orphan facing a fate worse than death, dastardly villains, conniving relatives, family fortunes—it's all here. So are the weaknesses of the genre: absurd coincidences, too-ample exposition at the climax, terribly tidy conclusions. Those who know what to expect will find this a lightweight but exciting page-turner, a good read for a rainy afternoon, that ultimately satisfies. (Fiction. 8-12) Read full book review > 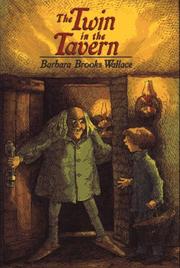 CHILDREN'S
Released: Oct. 29, 1993
THE TWIN IN THE TAVERN
by Barbara Brooks Wallace
CHILDREN'S
Released: Oct. 29, 1993
THE TWIN IN THE TAVERN
by Barbara Brooks Wallace
Teddy's Aunt and Uncle Bunz, who've raised him since the death of his parents, have also died at the outset of this fast-paced mock-gothic. To avoid being sent to the workhouse, Teddy falls in with the villains who've taken his aunt and uncle's possessions. He sleeps under the kitchen table at the Dog's Tail Inn, eats meager scraps left on plates, and works unceasingly, with the threat of being shut into the icehouse for the slightest infraction hanging over his head. Meanwhile, his uncle's last words ring in his ears: ``Nothing is what you think. You are not really ours...Find your twin and you...will know who you are...Be careful lad...Trust no one!'' Wallace (Peppermints in the Parlor, 1980) populates her story with wonderfully creepy, sinister, and mysterious characters—the reader's never sure whether Teddy is confiding in the right people when he begins to search for his twin, while the denouement makes a dandy surprise for him and the reader alike. (Fiction. 8-12) Read full book review >