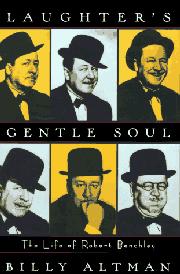 BIOGRAPHY & MEMOIR
Released: April 1, 1997
LAUGHTER'S GENTLE SOUL: THE LIFE OF ROBERT BENCHLEY
by Billy Altman
BIOGRAPHY & MEMOIR
Released: April 1, 1997
LAUGHTER'S GENTLE SOUL: THE LIFE OF ROBERT BENCHLEY
by Billy Altman
Journalist Altman essays the biographer's craft with the story of the actor, comedian, theater critic, and genial Nabob of New York and Hollywood who, half a century after his death, may still be the funniest American writer of them all. Coming to Gotham from New England with a Harvard degree in hand and without a career in sight, Benchley displayed a highly developed comedic gift that soon placed him first among equals at the fabled Algonquin Round Table. In that Vicious Circle, the young wag somehow retained his sweet nature. That, coupled with a facile wit, captivated the likes of Robert Sherwood, Dorothy Parker, F. Scott Fitzgerald, Franklin P. Adams—all the beautiful people of the age, and phalanxes of fans. Thence to the movies for scriptwriting, character acting, and a series of legendary short comic films. Benchley was, in turn, bumbler and jaunty boulevardier, teetotaler and prodigious imbiber. The tales of his wit and the anecdotes of his hijinks are manifold, of course. Tracking secondary sources, primarily Nathaniel Benchley's pleasing 1955 narrative of his father's life, Altman provides little that is new, offering just a discreet word or two concerning the drinking and genteel womanizing. (Ane he will surely offend all of Canada by calling Stephen Leacock a Briton; the estimable professor left England at age six.) The lesson of the present text, nevertheless, as Franklin P. Adams taught, is that ``20th century American humor owes its soul'' to Robert Benchley. Not much new here, but the good old yarns of the Master and his times are worth hearing again. And the extensive quotes from his comic canon, including some bright theater reviews, are worth the price of admission, particularly if they impel the reader to seek out more of Dr. Benchley's works. They may be the sovereign remedy for what ails us all. (illustrations, not seen) Read full book review >