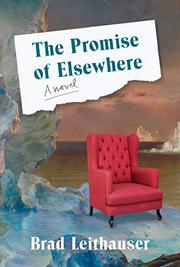 THE PROMISE OF ELSEWHERE
by Brad Leithauser
"An exceptional glimpse of the human comedy marked by sometimes dazzling prose."
A Michigan art-history professor sets off on a journey to see the world's finest architecture and perhaps forget some of life's trials in this keen-eyed comic work. Read full book review > 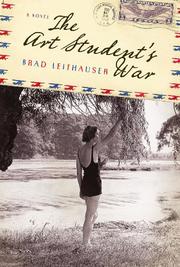 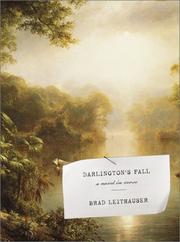 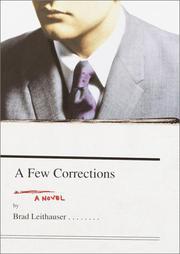 A FEW CORRECTIONS
by Brad Leithauser
"Dialogue sometimes sounds more like writing than real speech, but for the most part, Leithauser maintains a breezy, believable tone while doing justice to his weightier life-and-death themes: a lovely read."
Leithauser (The Friends of Freeland, 1997, etc.) transcends the writing-school cleverness of his premise in a genuinely funny, quietly elegiac fifth novel.Read full book review > 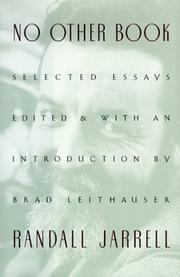 HISTORY
Released: June 13, 1999
NO OTHER BOOK: SELECTED ESSAYS
by Randall Jarrell, edited by Brad Leithauser
HISTORY
Released: June 13, 1999
NO OTHER BOOK: SELECTED ESSAYS
by Randall Jarrell, edited by Brad Leithauser
A selection from the ardently, offhandedly composed criticism of, in editor Leithauser's words, "an informal, brazen, unfootnoted diamond-in-the-rough." At the height of Jarrell's critical output, Berryman called him "the most powerful reviewer of poetry active in this country," an ironic compliment for a prolific poet whose essay collections are now mostly out of print or unavailable. From Poetry and the Age (1953), A Sad Heart at the Supermarket (1962), The Third Book of Criticism (1969), and Kipling, Auden & Co. (1980), poet and novelist Leithauser (Friends of Freeland, 1997, etc.) has assembled a representative sample of Jarrell's work on Willliam Carlos Williams, Wallace Stevens, Marianne Moore, Robert Graves, W.H. Auden, and others; his views on reading and criticism; and his cultural commentaries. In his excellent pieces on Frost, Whitman, and Housman, Jarrell immediately distinguishes himself from coeval New Critics with his unfiltered sense of a poem's mood and affect as revealed in its language, rather than in the epistemological ambiguities of its diction. In addition to the longer pieces, Leithauser has assembled "A Jarrell Gallery" culled from other sources. These brief excerpts, each a paragraph at the most, evidence his keen pleasure in good poetry and his feared invective against bad (e.g., "If [Stephen Spender] were as soft and sincere and sentimental as most of his poems make him out to be, the rabbits would have eaten him for lettuce, long ago"). Jarrell's writings on 1950s mass culture in "The Rest of It," however, often display a time-capsule mustiness in their complaints about Reader's Digest culture and all-American conformity. Still, Jarrell's clear-eyed view of his times has a glint of prescient clarity, as when he decries the academic professionalization of criticism and its ascendency over the works examined in "The Age of Criticism." In these well-chosen essays' unsparing generosity—and disparagement—Jarrell, unlike most critics, vividly conveys his enthusiasm for and occasional disappointment with contemporary poetry. Read full book review > 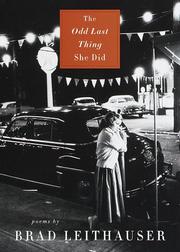 Released: Sept. 16, 1998
THE ODD LAST THING SHE DID: POEMS
by Brad Leithauser
Released: Sept. 16, 1998
THE ODD LAST THING SHE DID: POEMS
by Brad Leithauser
The fourth collection by the novelist (The Friends of Freeland, 1997, etc.) and MacArthur fellow demonstrates the same formal fluidity and clarity of expression as his previous books. But Leithauser is still plagued by an unbearable lightness, a simplicity never elevated by wit or profundity, just boyish puns and an occasional burst of ecstatic lyricism. Leithauser stays fairly close to his announced subject—the relations of men and women—and mines his family history in support of his father's wisdom: —Men and women! There's no end,/no end to what they—ll do!— His senile grandmother thinks a fellow old-age home resident is her long-dead husband; his father, wounded in war, displays old-fashioned gallantry on a streetcar; and his grandmother's sister, full of big-city dreams, turns to liquor after her beloved dies in WWI. The fine title poem, one of Leithauser's strong, Frost-like narratives, tells the story of a young woman's suicide in 1953—a fully imagined tale of a postwar Ophelia. A number of gentle lyrics celebrate the poet's wife—her eyes, an early kiss, words fumbled in love, and, on her birthday, a testimony of her strength. Poems about men among men seem to bring out Leithauser's puerility, especially an ill-conceived three-part tale of a friend's betrayal. Early memories of an astronomer uncle and beer-drinking with his father pale beside Leithauser's more impersonal poems: a deft portrait of an aging hunter, a clever play on words in honor of Malcolm Lowry, and a perfect lyric on the sky over Shiloh as reenactment of war. Always agreeable, but Leithauser's modest passions seldom compel. Read full book review >

FICTION & LITERATURE
Released: Jan. 24, 1997
THE FRIENDS OF FREELAND
by Brad Leithauser
FICTION & LITERATURE
Released: Jan. 24, 1997
THE FRIENDS OF FREELAND
by Brad Leithauser
A Northern Saga, longer than an Arctic shadow and tougher to swallow than frozen venison filet, from a gifted poet and novelist (Seaward, 1993, etc.) who seems to have had a lot of time on his hands. Freeland can't be found on any map. Close to Greenland and Iceland, it's a former Scandinavian colony that lies just below the Arctic Circle and gives shelter to some 60,000 souls scattered across four small islands. The Freelanders, like most island people, live by fishing and, like all good northerners, love to drink. Lately, however, their children have been fishing less and drinking more, and quite a few have taken up hard drugs. This is the social crisis that Hannibal Hannibalsson, the President of Freeland, has to address in his campaign for reelection. ``I believe now,'' Hannibal declares, ``as I have always believed, that Freeland is the true world-light and if we remain faithful to ourselves we're the one true good hope of this troubled planet—the one true good hope!'' Hannibal's childhood friend Eggert Oddason, our narrator, is somewhat more cynical, adhering to the duty developed ``over a literary career spanning three decades and forty-nine books, to rail against my country and countrymen.'' Like most political pundits, Eggert starts with public issues but is more interested in private lives, and we soon learn how Hannibal managed his climb to the top and just how much it cost him and his friends—Eggert not least of all—for him to get there. A record of women shared and stolen takes up much of the story, as does a weird mystical quest for the ``Freeland Saga''—the ancient Freelandic epic poem whose possession by Iceland is a constantly simmering provocation. But it is hard to find much surprise in such an obvious election-year allegory, and it is harder still to see why such epic treatment was required. Skillfully crafted and conceived, but far too long and obvious. Read full book review >

ESSAYS & ANTHOLOGIES
Released: Feb. 22, 1995
PENCHANTS AND PLACES: ESSAYS AND CRITICISM
by Brad Leithauser
ESSAYS & ANTHOLOGIES
Released: Feb. 22, 1995
PENCHANTS AND PLACES: ESSAYS AND CRITICISM
by Brad Leithauser
The subjects in this collection of scrupulous, varied, but sometimes ephemeral essays from poet and novelist Leithauser (Seaward, 1993, etc.) range from mathematical to literary creativity, from Japan to Iceland. Whether writing about his intellectual leanings or new locations, Leithauser has a bifurcated, paradoxical attraction to the rational and the irrational, but he can cleverly isolate the rarefied points of their intersection: computerized chess, the literature of science biographies, the freewheeling quantum prose of Italo Calvino, the ratiocinated ghost stories of Henry James, the enigmatic novels of Kobe Abe. The collection's best is a lengthy piece of New Yorker reportage on a computer chess tournament, which is replete with astute, poetic reflections on mathematics, artificial intelligence, and human creativity. In lesser pieces, apart from functional but disposable book reviews, Leithauser courts the supererogatory (detailed but unexceptional essays on H.G. Wells, Thomas Pynchon, and, his personal favorite, Icelandic Nobel laureate Halldor Laxness) as well as the merely idiosyncratic (reviews of Colin Martindale's statistics-based aesthetics in The Clockwork Muse or Austin Wright's cult-novel utopia, Islandia). In ``Places,'' Leithauser tellingly opens with the multiple expatriate Lafcadio Hearn, who popularized Japan at the turn of the century but, he notes, could not truly penetrate the Meiji zeitgeist. Leithauser's own, literate forays into Japan popularize its more important, relatively unexported pre- and postwar authors, such as recent Nobel Prize winner Abe (now slightly less obscure in America). Though under-represented by comparison, Iceland benefits more than Japan from Leithauser's literary approach to its history and carefully preserved language. As Leithauser remarks about his attraction to Iceland (and by extension, all the topics here), he needs subjects remote from his experience and literary tradition, a guiding principle that leads both to exotic insights and, occasionally, to the abstruse. Read full book review >

FICTION & LITERATURE
Released: May 18, 1993
SEAWARD
by Brad Leithauser
FICTION & LITERATURE
Released: May 18, 1993
SEAWARD
by Brad Leithauser
Leithauser (Equal Distance, 1984; Hence, 1988) peers uncertainly into the more remote corners of the middle-class soul- -in this sadly prosaic account of grief and desire. Terry Seward is a 40-ish Washington lawyer who sees his dead wife one night in a Virginia swamp. This is not really the sort of thing he's equipped for: the son of an insurance actuary, Terry manages to temper the imagination of a bureaucrat with all the spontaneity of a mortician. Since most of his Washington friends seem as embarrassed by Terry's revelation as he is himself, he goes afield to Baltimore to seek the advice of Curly Kopp, a lunatic pet-shop keeper who was Terry's freshman roommate at Princeton. Kopp's willingness to accept the reality of Terry's vision encourages him to reconsider the state of things and helps him to imagine the existence of worlds he had never dreamt of. He drops out of his law firm and sets off on what soon becomes recognizable as a pilgrimage to no particular place. Leithauser is very good at setting his scenes, and he manages to make Terry's disorientation all the more palpable by enclosing it within a conventional narrative that is largely inhabited by stereotypes (the cute coeds, the macho law partner, etc.), but there is a disconcerting laxity to the plot—as if the author were as embarrassed as Terry himself is about the mysticism inherent in the story, and had determined to rein it in as much as he could. This is all the more disappointing because those scenes that deal directly with Terry's vision carry a tremendous power. Ultimately, they end up buried beneath the chitchat of a thoroughly formulaic novel that they should have transfigured. An honest failure by a true master: had Leithauser only tightened (and shortened) the plot he could have hit the mark, but he dawdles his way through and loses his chance. Read full book review >