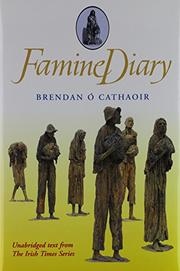 HISTORY
Released: Feb. 1, 1999
FAMINE DIARY
by Brendan O'Cathaoir
HISTORY
Released: Feb. 1, 1999
FAMINE DIARY
by Brendan O'Cathaoir
An unfocused, repetitive account of the horrific Irish Famine (1845—50) told through newspaper articles, letters, and official documents. In the worst peacetime tragedy of 19th-century Europe, Ireland lost three million people to death and exile. The Great Irish Famine was more than a natural disaster triggered by a blight on the potato crop—it constitutes a shocking case study on the failure of British colonialism. The author exhaustively details the devastating impact of the Famine on the everyday lives of Irish families. It's a predictably woeful tale of evictions, hunger, the poorhouse, sickness, exile, and death. Ireland's newspapers, clergymen, and prominent citizens demanded drastic action . The British government, viewing Ireland as a colonial backwater, met the crisis with almost criminal neglect. Britain's official adherence to doctrines of laissez-faire economics worsened the Famine, as did laws preventing Ireland from importing lower-priced foreign grain. The infamous Charles Trevelyan, secretary of the British treasury, summed up Westminster's "hands off" attitude: "It forms no part of the functions of government to provide supplies of food." British legislation designed to help the destitute actually encouraged landlords to evict their Irish tenants. The viceroy of Ireland, Lord Clarendon, viewed these evictions and the resulting flood of emigration as a healthy restructuring of the Irish economy: "Priests and patriots howl over the Exodus," wrote Clarendon, "but the departure of thousands of papist Celts must be a blessing." —'Cathaoir, an Irish Times journalist, bases the book on his popular series of weekly newspaper articles. While the diary entries work well individually, the book as a whole is disjointed, shapeless, and repetitive. What's lacking is a consistent narrative focus or larger historical analysis to connect the scores of diary entries into a structural whole. A flawed compilation of individual episodes lacking an authorial point of view or a cohesive narrative focus, it's bound to disappoint the general reader. Read full book review >