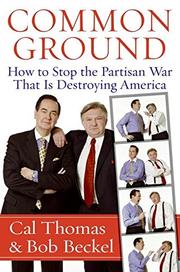 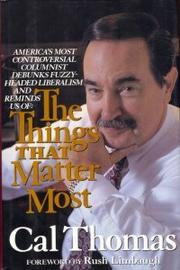 NON-FICTION
Released: May 31, 1994
THE THINGS THAT MATTER MOST
by Cal Thomas
NON-FICTION
Released: May 31, 1994
THE THINGS THAT MATTER MOST
by Cal Thomas
Short, acerbic takes on contemporary mores from a widely syndicated newspaper columnist who views the state of the union with considerable alarm. Thomas (whose monosyllabic first name could easily stand for Calvinist) trains his fire on two targets: ``the secular, libertine vision'' of the tuned-in, turned-on 1960s and the havoc that vision subsequently wrought upon an America Thomas idealizes as ``the virtuous, religious republic of our history.'' Relying mainly on anecdotal evidence, he offers a heartfelt, deadly earnest jeremiad detailing how the radical anti-establishment precepts embraced by many baby boomers in their salad days have endured—and helped to undermine traditional values. Thomas accuses boomers of having unwarranted confidence in big government's capacity to solve socioeconomic problems and of harboring ruinously permissive attitudes toward drugs, pornography, sex, and even violent crime. While he fulminates effectively against abortion on demand, no- fault divorce, single-parent families, homosexual marriages, socialized medicine, Hillary Clinton, declining rates of literacy and numeracy, and cultural/gender sensibilities run riot. Thomas has a pro-active program of his own. In brief, the author's ethic centers on what he views as the bedrock graces and verities of Western civilization: church, family, community, discipline, self- sufficiency, industry, individual initiative, objective standards of good and evil, and above all, an abiding faith in God. On occasion, the author sounds like a herald of theocracy: ``Values, personal and national, must be drummed into children so they will think and act in ways that promote American interests, and their own.'' For the most part, however, Thomas proves an articulate, principled spokesman for the conservative agenda. The text includes an awesomely self-congratulatory foreword from Rush Limbaugh. (First printing of 150,000; Conservative Book Club selection; $150,000 ad/promo; author tour) Read full book review >