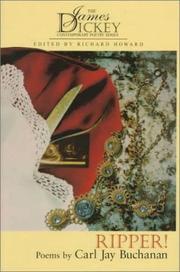 Released: July 1, 1999
RIPPER!
by Carl Jay Buchanan
Released: July 1, 1999
RIPPER!
by Carl Jay Buchanan
This debut by a Michigan educational assessor is very much a book, not a collection of individual poems, all about the turn- of-century murderer known as Jack the Ripper. It's also easy to see why Richard Howard, who, as the series editor, provides an introduction, was attracted to Buchanan's elaborate construction: the bulk of the poems are dramatic monologues, a form best practiced in our time by Howard himself. The first sections of this grim volume are the weakest: Jack addresses a number of the women he murdered, providing the sick rationale for his acts. In one case, he fancies himself a poet inspired by Poe, in another an avenging angel. Each victim responds in kind: one sees her parents in Jack's evil face, another speaks from the afterlife of vengeful witchcraft, and, best of all, one dispels his Poe pretensions. Buchanan's voices in this early section seldom vary, and Jack sounds more like Jack Nicholson in The Shining than any fin de siäcle rogue. Buchanan interrupts his book with a prose section, "Ripperology," that rehearses the evidence for the main real-life suspects in the case. After this, his verse truly takes off: each Jack, in language suitable to his background, explains his reasons for murder: the butcher confesses his grotesque love of necrophilia, cannibalism, and sex with meat; a priest describes sacramental killing as God's will; and the failed poet (a real-life tutor to the Queen's grandson) relies on bad ballads and rhymes to justify his actions. The two most plausible suspects, the Queen's physician and her grandson, the Duke of Clarence, are motivated by drug-addiction and syphilitic madness. The woman-hating language of the speakers and the gruesome details of their actions are not for the faint of heart. But Buchanan has achieved something clever and powerful here: he's revealed the mysteries of identity at the heart of a Victorian murder mystery. Read full book review >