MYSTERY THRILLER
Released: Nov. 1, 1996
FALSE LIGHT
by Caroline Llewellyn
MYSTERY THRILLER
Released: Nov. 1, 1996
FALSE LIGHT
by Caroline Llewellyn
Following in the fog-and-chills wake of major eminences of romantic suspense from du Maurier on, relative newcomer Llewellyn (Life Blood, 1993, etc.) sets her tangled mysteries in surroundings that vibrate with foreboding. This one centers on a grim house near the Cornish cliffs and the fogbound Atlantic, filled with neurotic artistic types. Divorced Dana Morrow, still mourning the loss of her unborn child, becomes obsessed with the brief, sad life of a mid-19th- century spiritualist, Marianna Hobhouse, married to a pioneer photographer who just might have been responsible for his young wife's death. Dana is invited to the Hobhouse home in Cornwall, now owned by Hobhouse's descendant, the famous, irascible photographer Quenton Finn. Among Finn's household and guests: Finn's son Daniel, also a photographer, and clearly attracted to Dana; a serene housekeeper, the sister of Finn's dead wife (was her plunge off the cliff accidental?); a failed photographer who is now a wildly innovative gallery owner; an eternally battling Yugoslavian couple and their child, whom Dana rescues from the cliffs; a financial adviser who collects arcane death studies; Finn's patroness, who irritates everyone; and a woman from a London design firm, a witchy being of no particular moral compass whose seductive powers are considerable. Resentment and simmering anger combine to provoke new violence in the old Hobhouse environs. There'll be four murders in all (two viewed in flashbacks), much to-ing and fro-ing through the moors, and a climax featuring Dana's skin-scraping escape from the murderer across a rooftop while flames pop below. No classic murder mystery this; victims and the lethal predator are none too difficult to spot. But solid info on the art of photography, a variety of scandals, contemporary and historical, and that wonderful, moody setting shape a satisfying entertainment. Read full book review > 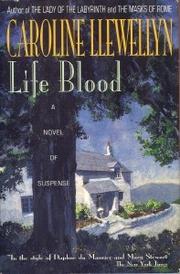 FICTION & LITERATURE
Released: Oct. 1, 1993
LIFE BLOOD
by Caroline Llewellyn
FICTION & LITERATURE
Released: Oct. 1, 1993
LIFE BLOOD
by Caroline Llewellyn
An involving romantic mystery that confirms the status of Llewellyn (The Lady of the Labyrinth, 1990, etc.) as a worthy contender for membership in the DuMaurier, Whitney, Stewart & Holt sorority of richly atmospheric suspense writers. Jo Treleven, a children's book illustrator, has come to England from her native Canada after the sailing death of her husband. With her baby son, she moves into Longbarrow, the Cotswolds cottage she inherited from her grandmother, intending to live there long enough to let ghosts rest back home. She also wants to track down a copy of her grandmother's one and only novel, Life Blood, most copies of which were destroyed in the bombings of WW II. Jo's cottage is somewhat spookily remote from the rest of the village, and 50 years earlier was the site of a murder. Adding to its eerie atmosphere is its location near a ``barrow,'' one of the ancient burial mounds that abound in the Cotswolds region around which many myths—most violent and disturbing—have gathered. To her surprise, Jo learns that the nearby Mallabys, a wealthy blue- blood publishing family, are her distant relatives. They do not seem very happy, however, with their newly discovered kinswoman. As Jo sets about searching for her grandmother's novel, she discovers something strange: all copies in libraries throughout Britain have been gutted by vandals. Someone does not want the contents of that book known. Through reviews, though, Jo learns that the characters in the missing novel resemble the Mallabys and her grandparents, and that betrayal and murder are presented very convincingly.... Refusing to be deterred by the Mallabys' cold warnings, Jo persists with her search, supported by someone who promises to become more than a friend, David Cornelius, the handsome American proprietor of a nearby farm. Despite the vague characterization of the romantic hero: a satisfying story with descriptions of the English countryside so vivid that you can almost smell the hay. Read full book review >