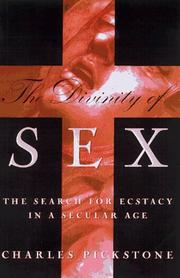 NON-FICTION
Released: Aug. 1, 1997
THE DIVINITY OF SEX: THE SEARCH FOR ECSTACY IN A SECULAR AGE
by Charles Pickstone
NON-FICTION
Released: Aug. 1, 1997
THE DIVINITY OF SEX: THE SEARCH FOR ECSTACY IN A SECULAR AGE
by Charles Pickstone
An oddly pinched view of the eternally provocative combination of religion and sex that does little justice to either, especially the latter. That sex is the new religion of the 20th century is reasonable enough as a casual observation, but Pickstone, an Anglican vicar, attempts to show such a general statement to be literally true. Reading often like a letter home from a Victorian autodidact transported into the late 20th century—and not always even that far—The Divinity of Sex, while proclaiming sex to be the new opiate of the people, engages with it only on a curiously abstract and conventionally idealized level. Spurning any investigation of actual sexual practices and attitudes, Pickstone mixes together material drawn from an unrepresentative sample of literature (especially D.H. Lawrence) and popular culture with snippets of secondhand psychology meant to represent society at large. From this grab bag of examples he draws a string of generalizations. By turns self-consciously open-minded and censorious, these observations culminate in a vague and sober call for a proper appreciation of the ``sacredness'' of sex. In the service of this thesis, distinctions between love and sex, or between relating to another person and to some transcendent ``other,'' are routinely elided. Worse, as practically any concern with existence, identity, consciousness, or even our corporeal nature is defined as essentially ``religious,'' most modern activities turn out to be new religions—including sports, art, fashion, dance, and environmentalism. The book's own evidence, especially its strongest point about the importance of the body in the post-religious imagination, simply makes it increasingly clear that secularization marks a change in self-perception much more fundamental than a new faith in sex (and that sex has always had a charged relationship with religion). Exhausting a useful metaphor, Pickstone inadvertently leaves the impression that within this momentously changed worldview, sex is probably just sex, and spirituality something else entirely. Read full book review >