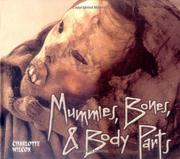 MUMMIES, BONES, AND BODY PARTS
by Charlotte Wilcox
The author of the award-winning Mummies & Their Mysteries (1993) returns to the intriguing subject of mummies. Here she explains how they are formed, how scientists use a variety of sophisticated techniques to learn about peoples and cultures of long ago, and some of the controversies surrounding the study of human remains. As with the previous title, the photographs presented here are striking, from the Inca child who appears on the front cover, to the mummy of Egyptian King Seti I, which appears on the back. Other photographs show some of the first tattoos, details of the Iceman, an Italian child who died of smallpox 400 years ago, the remains of light-haired Caucasian mummies from Xinjiang, China, and the well-preserved bodies of Philip Calvert, governor of Maryland from 1660 to 1661. The science is impressive, as carbon-14 dating, CT scans, DNA profiling, and X-rays are used to solve ancient mysteries. What were the people like? What did they eat? When did they die? What caused their death? What were the diseases they suffered? The author also discusses the controversies as different cultures clash over studying human remains. She mentions the Native American Graves Protection and Reparation Act which gives Native Americans control over native remains buried on government land or held in collections owned or funded by the government, and discusses former Egyptian President Anwar Sadat's, efforts to house Egyptian mummies in a more dignified way. Though Wilcox discusses respect for the dead, she nonetheless pictures the controversial "Human Body Art" of German artist Gunther von Hagens, and "Sylvester," a mummy used to greet customers in a shop in Seattle. Also pictured are the remains of an outlaw put on display for 65 years as a moneymaking exhibit for a funeral parlor. The author concludes with a glossary, extensive bibliography including Web sites, and a detailed index. Intriguing science, dramatically presented. (Nonfiction. 9-13)Read full book review > 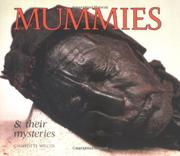 CHILDREN'S
Released: June 3, 1993
MUMMIES AND THEIR MYSTERIES
by Charlotte Wilcox
CHILDREN'S
Released: June 3, 1993
MUMMIES AND THEIR MYSTERIES
by Charlotte Wilcox
``You may have mixed feelings about seeing a mummy,'' writes the author of Trash! (1988) and A Skyscraper Story (1990); but ``remember that a mummy, though once really alive, is now really dead.'' Suggesting that mummies be viewed with respect rather than jokes or revulsion (though she's not above an occasional joke herself—one hideous specimen is labeled ``Miss Chile''), Wilcox uses examples from around the world to show what can be learned from them: why many Egyptian mummies have badly worn teeth; why so few Incan men were found at the burial site near Pisco; what killed members of the 1845 Franklin expedition in northern Canada; the wealth of cultural detail preserved with the bog people; a 5000- year-old hunter recently discovered in the Italian Alps. Wilcox describes the process of mummification, both accidental and deliberate (some Japanese Buddhist priests did it to themselves), and concludes with a look at modern mummies, including a gold- plated cat. Plenty of well-chosen color photos add meat to the bones, both enhancing the lively text and inducing delicious shudders. Glossary; brief list of places to visit; index. (Nonfiction. 10-12) Read full book review >

Released: Oct. 3, 1990
A SKYSCRAPER STORY
by
Released: Oct. 3, 1990
A SKYSCRAPER STORY
by
Using the elegant 57-story Norwest Center in Minneapolis (completed in 1989) as an example, here's a step-by-step photo essay on how such an urban giant comes to be: choosing the site and harmonizing with it; finding the rationale and logistics of construction; putting on finishing touches. The brief, well-organized narrative and crystal-clear color photos make this fine nonfiction. Intelligent, informative foreword by the architect, Cesar Pelli; glossary. Read full book review >