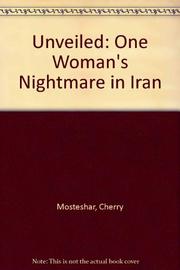 NON-FICTION
Released: March 1, 1996
UNVEILED: ONE WOMAN'S NIGHTMARE IN IRAN
by Cherry Mosteshar
NON-FICTION
Released: March 1, 1996
UNVEILED: ONE WOMAN'S NIGHTMARE IN IRAN
by Cherry Mosteshar
A talky, untidy, but nevertheless hard-to-put-down account of what happens when an expatriate journalist from a fabulously wealthy Iranian family resettles in her homeland to write about life under Islamic rule. As a woman, Mosteshar must wear the chador, or veil, plus trousers and coat in even sweltering weather to prevent any chink of female hair or flesh from showing, in conformity with endless (and changeable) social and religious codes. In her various quests to obtain a press card, get medical care for her relatives, and ultimately marry and divorce, she must deal with a bureaucracy corrupt beyond Kafka's wildest nightmares. Undeterred by the miserable examples of her female relatives, the wives of boors who, according to Mosteshar, use the Koran as a sanction to abuse and humiliate, she too, marries a boor—this one with another wife and family he requires her to both countenance and financially support. Her motives for marrying this man against her own better judgment are never made explicit. Naturally, the marriage is a disaster. Being Iranian, for Mosteshar, becomes a kind of gruesome psychological affliction: The good Muslim wife that she, despite her Oxford education, strives to be is, by Western standards, a victim of masochism and delusion. Finally, she does rouse herself to begin the difficult process of regaining her freedom and repairing her damaged self. Although the book contains much interesting information—we learn of the seegeh, or temporary marriage (basically legalized adultery), the ``morals police,'' and constant body searches—and often a comic tone, Mosteshar has evidently not awakened completely enough from her nightmare to tell her story with much perspective: There are far too many repeated assertions of how much she hated her husband and how disgusting his sexual advances and gobs of spit were. Overall, reading Unveiled, it's hard not to see today's Iran as a vast, ugly tragedy for women. (8 pages b&w photos, not seen) Read full book review >