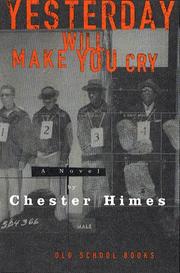 FICTION & LITERATURE
Released: Feb. 1, 1998
YESTERDAY WILL MAKE YOU CRY
by Chester Himes
FICTION & LITERATURE
Released: Feb. 1, 1998
YESTERDAY WILL MAKE YOU CRY
by Chester Himes
Himes's first novel, finished after his release from prison in 1937, wasn't published until 1952, and then in much altered form, as Cast the First Stone. In this original version (the first hardcover in the Old School Books imprint), Himes reveals the dark and twisted reality of life behind bars long before Genet or Eddie Bunker. The story now also includes the origin of the hero's life in crime. From as far back as he can remember, Jimmy Monroe couldn't satisfy an inner restlessness. With his preacher father and snobby mother, he moved throughout the South and Midwest, along the way managing accidentally to blind his younger brother and get expelled from a number of schools. An on-the-job accident leads to a nice settlement, which finances his short time at college, where he majors in carousing and is soon thrown out. His taste for the streets, cheap women, and easy thrills takes him to Chicago and the larceny that gets him 20 years hard labor. The bulk of the narrative chronicles the day-to-day horrors of prison in the '30s- -corrupt guards, virulent racism, casual violence, and bizarre courting rituals between men starved for affection and sex. Jimmy's depression sinks to its lowest after a prison fire, described with a lyric intensity, releases a jailhouse anarchy that ends only with a brutal crackdown. Jimmy's few pleasures evaporate until a friendly guard allows gambling to resume and organizes a softball team. Much of the story concentrates on the ``girl-boy'' culture behind bars, and Jimmy, with the beautiful young Rico, indulges in a romance of ``fantasy and frenzy and delirium.'' Just as the pair's dangerous friendship threatens Jimmy's future in jail, he's transferred to farm duty, the last step before parole. Jimmy's sexual confusion, and his moment of ``blackness'' during the fire, suggest the course of his own redemption, which finds ultimate expression in his first attempts as a writer. Himes captures it all in his inimitable, far from pulpy, prose. A revelation for Himes fans. Read full book review > 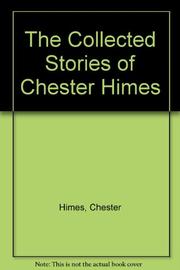 FICTION & LITERATURE
Released: May 15, 1991
THE COLLECTED STORIES OF CHESTER HIMES
by Chester Himes
FICTION & LITERATURE
Released: May 15, 1991
THE COLLECTED STORIES OF CHESTER HIMES
by Chester Himes
Himes (d. 1984) is well served by this collection of 61 stories (25 never before published): mostly short takes that deal with the black experience, ranging from impoverishment and prison life to the excesses and satisfactions of religion. While there's a good deal of rage here, and the tone of many pieces is sardonic, Himes is at his best when he qualifies such rage with dramatic irony. In ``Headwaiter,'' for example, Dick Small (``Flawless service for discriminating guests evokes in him a complete satisfaction'') does not so much recognize racism and his own lowly status as take on the patronizing tone of his white employers in his dealings with underlings. In ``A Nigger,'' Joe, a black woman's lover, listens from the closet as her elderly white sugar-daddy asserts his ownership, then opens the closet to look at Joe ``as if he was another garment he had bought for her.'' Such shadow play between the races reaches its bitter apex in ``A Modern Fable,'' a satire of Senator McDull, who can't understand why a worker would take a shot at him for opposing the WPA. In ``Dirty Deceivers,'' a couple, both pretending to be white, finally confess their pretense, only to begin ``feeling betrayed by each other.'' Other highlights: prison stories (``Prison Mass,'' Himes's most formally ambitious; ``Pork Chop Paradise,'' the story of a prisoner who becomes a successful street-preacher before a lust-filled decline) and a host of very short sketches that make their points and then stop. Himes will be best remembered for his Harlem detective novels (Cotton Comes to Harlem, etc.) and other longer narratives. While some of the pieces here read like dated magazine fiction, the best rise above their time and bear witness to the racism that compromised the humanity of white and black alike. Read full book review >