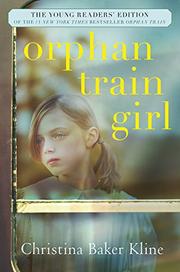 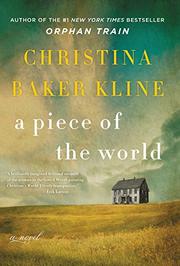 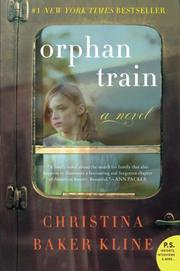 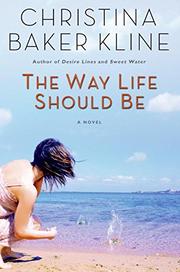 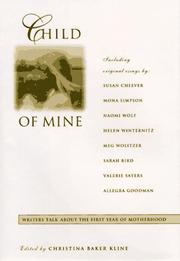 NON-FICTION
Released: May 2, 1997
CHILD OF MINE: WRITERS TALK ABOUT THE FIRST YEAR
edited by Christina Baker Kline
NON-FICTION
Released: May 2, 1997
CHILD OF MINE: WRITERS TALK ABOUT THE FIRST YEAR
edited by Christina Baker Kline
A refreshing essay collection on the two years that flank a baby's birth, from 28 well-known writers, edited by novelist Kline (Sweet Water, 1993). Pieces by Allegra Goodman, Valerie Sayers, Mona Simpson, Naomi Wolf, and Meg Wolitzer, among others, are divided into three sections—``Anticipation,'' ``Initiation,'' and ``Child of Mine.'' Those describing their pregnancies in ``Anticipation'' remember fretting that they lacked the maternal instinct and fearing, as journalist Elissa Schappell put it, that they would join those ``other mothers who snacked [on] Cheerios out of tiny plastic bags, [and] smelled faintly of baby vomit.'' ``Initiation'' covers childbirth (``doing a marathon without moving an inch,'' quips novelist Sarah Bird), breastfeeding, and what editor/novelist Alisa Kwitney calls ``the eternal now'' of living with a baby. The final section touches on the terrors of babysitting, defining one's child's place in the world, and the child's effect on the mother, nicely symbolized by a worn bear in Susan Cheever's essay. Despite misgivings, marital discord, even encounters with violent eruptions of individuality in one's offspring, the writers present a nearly unified vision of hope. An infant may scream, poop, and tyrannize, but as political writer Helen Winternitz says of her son, he ``opened up a new continent for me, a territory of emotions as big and inviting and perilous as Africa.'' There is sadness at initial separations and some regret, but because most of the children discussed are still young, these emotions are largely anticipatory. One exception is novelist Abigail Stone, who raised her now-grown daughter alone and poor, and offers a moving confession of the ways in which poverty and her conflicting needs to be a writer and a mother affected her relationship with her daughter. For those who find pregnancy books disingenuous and friends with children too knowing, this book offers an alternative community—skeptical, worried, reflective, and grateful. Think of it as you sneak your two-month-old into the cineplex. Read full book review >

NON-FICTION
Released: April 15, 1996
THE CONVERSATION BEGINS: MOTHERS AND DAUGHTERS TALK ABOUT LIVING FEMINISM
by Christina Looper Baker, Christina Baker Kline
NON-FICTION
Released: April 15, 1996
THE CONVERSATION BEGINS: MOTHERS AND DAUGHTERS TALK ABOUT LIVING FEMINISM
by Christina Looper Baker, Christina Baker Kline
A revealing yet comforting overview of the generational passage of feminism that discloses as much about elemental family conflicts as about the future of the women's movement. In 23 sets of interviews and personal statements of second- wave feminists and their daughters, Baker (English/Univ. of Miami) and novelist Kline (Sweet Water, 1993) probe each woman's growth as a feminist and the effects of her beliefs on her family. Interviewees range from politician Patsy Mink to social critic Barbara Ehrenreich to poet Joy Harjo to Holocaust survivor and lesbian anthologist Evelyn Torton Beck; the variety of their childhoods, ethnic heritages, and economic backgrounds demonstrates that feminism is not simply a white middle-class phenomenon. Yet common touchpoints emerge: Friedan and de Beauvoir were profound influences; the interviewees were often driven into activism and feminism by the experience of personal injustice; their children were the center of their world and are now more free to make choices than they. Most daughters of feminist leaders cite an increased confidence—a feeling, as Lori Smeal says, ``that I could do anything.'' There is also an understanding of the costs of being a superwoman; says Abigail Pogrebin, ``Maybe it's just not possible to have a husband, kids, career, and toned body all at the same time.'' Yet most daughters appreciate their mother's commitment, and some, like Wendy Mink, continue the activist tradition. Surprises in the book include the frequent examples of active two- parent childrearing, equitable marriages, and children facilitating their mother's emergence as a lesbian. Read as a blueprint to the next wave of feminism, the interviews offer only partial views: More must be done, today's problems are different and perhaps more subtle. But as a collection of discrete stories of a social movement and of the eternal bond of mother and child, this is an impressive book. (b&w photos, not seen) Read full book review > 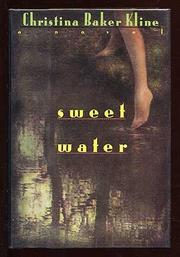 Released: June 1, 1993
SWEET WATER
by Christina Baker Kline
Released: June 1, 1993
SWEET WATER
by Christina Baker Kline
An ambitious but somewhat undercooked southern gothic psychological thriller from first-time author Kline. Cassie Simon is 27, a sculptor living in N.Y.C., working in an art gallery, having an affair with the gallery's owner, a womanizer, when her maternal grandfather dies and inexplicably leaves the Clyde family house and land in Sweet Water, Tennessee, to her. Although Cassie hasn't seen any of the Clydes since she was three—when her mother, Ellen, was killed in a car accident caused by the grandfather, who was drunk behind the wheel—Cassie decides to move down to Sweet Water and get to know her mother's family while she pursues her art. However, the family—Ellen's mother, called Clyde, and a sister named Elaine and a brother Horace—isn't especially glad to see Cassie; they think she's here to resurrect the scandals surrounding her mother's death and the earlier mysterious drowning of a townswoman named Bryce Davies. Naturally, Cassie becomes curious—just as her grandfather hoped she would when he left her the house, which she searches from attic to basement, discovering letters filled with family secrets. In alternating first-person narratives, she and grandmother Clyde, at first archenemies, eventually both come to terms with the fact Cassie's grandfather was not only a drunk but also a womanizer; that Clyde, who for a quarter-century has been suspected of murdering her husband's mistress Bryce, can now be forgiven for having simply rejoiced when Bryce died accidentally; and that Cassie's grandfather, although weak, did not murder his own daughter in revenge for the death of his mistress. Trouble is, the reader already knows all of this long before it's revealed, often awkwardly, in stormy late-night scenes. Meanwhile, Cassie has fallen for her aunt Elaine's adopted son Troy, who in the end takes her away from it all, to live with him in Atlanta. Deus ex machina. Unfortunately, the plot often creaks. Read full book review >