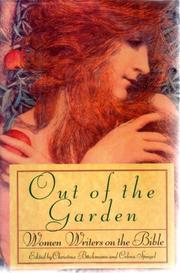 NON-FICTION
Released: Aug. 1, 1994
OUT OF THE GARDEN: WOMEN WRITERS ON THE BIBLE
edited by Christina Büchmann, Celina Spiegel
NON-FICTION
Released: Aug. 1, 1994
OUT OF THE GARDEN: WOMEN WRITERS ON THE BIBLE
edited by Christina Büchmann, Celina Spiegel
A group of really smart women give astute readings of the Bible that, for the most part, subscribe to neither religious nor feminist orthodoxies. Happily, what Daphne Merkin, in her irreverent and surprising reading of The Song of Songs, calls the ``contemporary jargon- infused orthodox-feminist redactor...er, reader'' is virtually absent here. The 28 contributors to this volume are Jewish, Protestant, and Catholic, and they offer varied (and sometimes provocatively conflicting) insights into characters and events in the Old Testament. They are most successful when, in the best tradition of biblical interpretation, they fill in the gaps in the sometimes spare narrative, closely questioning the motives and morals of the actors (male and female, human and divine) and uncovering the messages embedded in the text. The pieces range from the personal (e.g., Rebecca Goldstein's urgent childhood quest to know why Lot's wife looked back), to the rigorously analytical (e.g., Ilana Pardes's structuralist paralleling of the sibling strife between Rachel and Leah with that between Jacob and Esau), to the political (e.g., Patricia J. Williams links Pharaoh's daughter saving the baby Moses, and thus thwarting the attempted genocide of the Jews, with contemporary questions of race, family, government intrusion into reproductive issues). BÅchmann, a doctoral candidate in English literature (Univ. of California, Berkeley), refrains from the modern impulse to condemn Isaiah's portrait of God as ``savage and extravagant''; Lore Segal accepts the contradictions of a God who often changes his mind (``how else could one God encompass everything?''). Among the few less convincing entries are attempts to rehabilitate the reputation of biblical bad girl Delilah (by Fay Weldon, who seems to have little use for the Bible altogether) and Putnam senior editor Spiegel's evaluation of Queen Esther and her predecessor, Vashti, as feminist role models. A rewarding anthology by women who take the Bible seriously and on its own terms, as a literary, ethical, and spiritual expression. Read full book review >