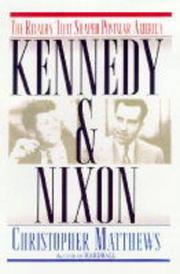 BIOGRAPHY & MEMOIR
Released: June 3, 1996
KENNEDY AND NIXON: THE RIVALRY THAT SHAPED POSTWAR AMERICA
by Christopher Matthews
BIOGRAPHY & MEMOIR
Released: June 3, 1996
KENNEDY AND NIXON: THE RIVALRY THAT SHAPED POSTWAR AMERICA
by Christopher Matthews
Matthews, the news anchor of the televison show America's Talking, offers an on- target dual portait of rival aspirants for the presidency, both eventually successful in their quest for the prize, both destined to end tragically. Richard M. Nixon and John F. Kennedy, Navy veterans of WW II, were elected as members of the House of Representatives' freshman class of 1946. At first they were friendly rivals: Matthews writes touchingly of their cordial personal relationship as colleagues (often sickly during his Senate career, Kennedy received regular hospital visits from the sympathetic Nixon). Nixon rose first, winning the vice presidency under Dwight Eisenhower (Kennedy cheered Nixon's rise in a personal note to the new vice president) and building a national reputation. The bitter and close-fought campaign of 1960 transformed the relationship between the two men: In the now legendary televised debates, Nixon came off as colorless and tired, while the handsome, relaxed Kennedy impressed viewers with his wit and command of detail. As the author shows, the exchanges between the two rivals, who were never far apart on policy matters, became abusive and personal as Election Day approached. In the end, Nixon lost the popular poll by little more than 100,000 votes. Bitter about alleged ballot theft in Texas, Illinois, and elsewhere, Nixon was convinced for the rest of his life that he'd been ambushed by the Kennedy machine. Nixon was eclipsed during Camelot's thousand days: even after Kennedy's 1963 assassination, he was haunted by the ghosts of Camelot and, more concretely, by the political prospects of Kennedy's brothers. Succumbing to paranoia even after his election to the presidency in 1968, Nixon conducted covert surveillances and smear campaigns against Ted Kennedy, Kennedy family allies, and other political opponents, a propensity that contributed to his eventual downfall and disgrace. Matthews doesn't break new ground, but he draws a striking picture of the destruction of a political friendship and its consequences for the country. (8 pages b&w photos, not seen) (First serial to Vanity Fair and Reader's Digest; author tour) Read full book review >