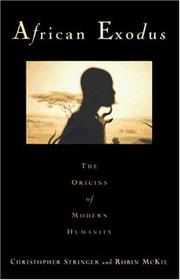 NON-FICTION
Released: July 1, 1997
AFRICAN EXODUS: THE ORIGINS OF MODERN HUMANITY
by Christopher Stringer, Robin McKie
NON-FICTION
Released: July 1, 1997
AFRICAN EXODUS: THE ORIGINS OF MODERN HUMANITY
by Christopher Stringer, Robin McKie
As surely as night follows day, one could expect a retort to the multiregional evolution of Homo sapiens as expounded by Milford Wolpoff et al. (in Race and Human Evolution, 1996). In the latter thesis the various races of humankind had migrated from Africa by two million years ago, evolved from Homo erectus, absorbed Neanderthal genes, and enjoyed enough matings at continental borders to commingle genes so that a single species of Homo sapiens emerged. Not so, say Stringer (director of the Human Origins Group, Natural History Museum, London) and McKie (science editor the Observer of London). Our ancestors left Africa barely 100,000 years ago, the offspring of a few ``Eves,'' to make their way in the rest of the world, outwitting or replacing whoever else was around—such as the Neanderthals. Who's right? Both sides claim fossil evidence, but Stringer adds a weight of DNA evidence that points to the very close match of mitochondrial DNA among non-African races, suggesting a recent separation, compared with more variation in African groups (mitochondrial DNA is inherited from the mother, hence the out-of-Africa thesis is often called the Eve theory). At this stage, the Stringer thesis has more going for it—in multiple lines of evidence as well as in plausibility (it seems more likely that our species got rid of Neanderthals rather than embraced them). But to keep the pot boiling, the authors also trot out theory after theory on the origins of language, art, religion, sexual behavior, etc., including what could be called the Lysistrata approach: Someone has proposed that at some pivotal time women smeared themselves with blood or else timed their periods so as to make themselves collectively unavailable for sex, forcing men to sublimate the urge by getting food for supper—going hunting, that is. In sum, the authors provide a good answer to multiregionalism but kindle even more fires to spark future debates on who, what, and why we are. (55 illustrations) Read full book review >