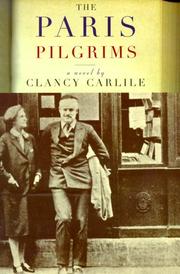 FICTION & LITERATURE
Released: July 1, 1999
THE PARIS PILGRIMS
by Clancy Carlile
FICTION & LITERATURE
Released: July 1, 1999
THE PARIS PILGRIMS
by Clancy Carlile
Paris may have been yesterday, as the late Janet Flanner observed, but the sex-mad City of Light portrayed in this ludicrously bad documentary novel by the author of Honky Tonk Man (1980), etc., is an intemperate never-neverland populated by historical characters reshaped into pulpy cartoon figures. Carlile's subject is young Ernest Hemingway, having survived WWI, married Hadley Richardson, and embarked for la belle France in 1922. The fun begins aboard ship, when the belligerent Ernest demands a match with a professional boxer—and the adoring Hadley knits him a pair of lavender trunks. No doubt that imagery, uh, colors their later relations with such Parisian eminences as "lesbian lionesses" Sylvia Beach, Djuna Barnes, and Natalie Barney—not to mention Gertrude Stein and her devoted "Pussy" Alice B. Toklas. In this bloated epic of namedropping, the most creative and energetic denizens of that time and place are revealed in all their lubricious inglory. James Joyce is a coprophiliac drunk (wife Nora understandably propositions Ernest, but is gently rejected); Ezra Pound a randy, foulmouthed anti-Semite; expatriate bisexual rich brat Robert McAlmon joins Ernest in Madrid to see the bullfights, share "roasted cojones," and—in this amazingly abrasive novel's wildest flight of fancy'submit to being buggered by his insistently masculine companion (in Spain they say si si?). "I never feel more alive than when I'm killing something," Ernest confesses, in one of innumerable ingenuous oversimplifications here. There's much, much more in the same vein: the relationship of Stein and Toklas, for example, is delineated with unrelenting crudity (Carlile on lesbian love is rather like Tom Clancy on high-tech warfare). Finally, mercifully, it ends, as the (undoubtedly exhausted) Hemingways return to America. A witlessly reductive romp distinguished—if that's the word—by breathless high-school prose, dime-store psychology, and enough unintentional humor to rival Monica's Story. Read full book review >