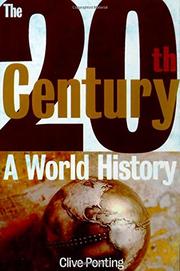 HISTORY
Released: April 1, 1999
THE TWENTIETH CENTURY: A WORLD HISTORY
by Clive Ponting
HISTORY
Released: April 1, 1999
THE TWENTIETH CENTURY: A WORLD HISTORY
by Clive Ponting
A bland and frustratingly abstract examination that emphasizes theoretical concepts, paying scant attention to specific people, places, and events. Ponting (Politics/Univ. of Wales; Armageddon: The Reality Behind the Distortions, Myths, Lies, and Illusions of World War II, 1995), argues that a few "core" states (e.g., the US, Britain, and Germany) have asserted their economic and military power to dominate the rest of the world's "periphery" and "semi-periphery" states. He views the 20th century as a continual, and largely predetermined, struggle between the few powerful "haves" and the majority of powerless "have-nots." After discussing the demise of colonialism, Ponting shifts to the contemporary reality of unregulated global corporations exploiting cheap labor and material resources around the globe. Ponting also cites problems of overpopulation, especially in Africa, and the related crisis of the world environment. While Ponting's analysis is difficult to deny, it's hardly groundbreaking. In discussing the global environment, for instance, he invokes the usual litany of cautionary tales: Chernobyl, Three-Mile Island, Bhopal, Love Canal, and the Brazilian rainforest. What Ponting notably neglects to discuss is how the solutions to global environmental problems will inevitably conflict with basic concepts of individualism and nationalism. In discussing the growing levels of economic inequality among and within nations, Ponting exhausts the reader with a barrage of statistics. (Do we really need to know the rate of automobile ownership in Qatar?) At times, Ponting's conceptual approach results in bloodless, academic prose. Personalities are almost completely absent. That said, Ponting is outstanding when discussing the most important trend of the post—Cold War world: the destabilizing resurgence of nationalism. Now, more than ever, we exist in a world of regional alliances, confusing ethnic conflicts, and nationalist fervor. The Balkans, always a stew of ethnic and nationalist rivalries, has reemerged as "the tinderbox of Europe." Other than his highly relevant discussion of the "new" nationalism, Ponting's conceptual analysis offers little that's edifying. Read full book review >

HISTORY
Released: Aug. 1, 1995
ARMAGEDDON: THE REALITY BEHIND THE DISTORTIONS, MYTHS, LIES AND ILLUSIONS OF WORLD WAR II
by Clive Ponting
HISTORY
Released: Aug. 1, 1995
ARMAGEDDON: THE REALITY BEHIND THE DISTORTIONS, MYTHS, LIES AND ILLUSIONS OF WORLD WAR II
by Clive Ponting
You'll never think of WW II as ``the good war'' again after reading Ponting's catalogue of catastrophic mistakes and horrific atrocities committed by political and military leaders on all sides. In his ninth book, British historian Ponting (Univ. of Swansea, Wales; A Green History of the World, 1992, etc.) offers his own interpretation of the war's big issues. Eschewing military history, he instead provides weighty, chapter-length examinations of nine ``common themes'' and discusses ``how the various belligerents (and neutrals) responded to the common problems.'' This analysis leaves out individual personalities and battles and zeroes in on broad struggles, such as the homefront, the neutral nations, technology, overall strategy, civilians, and the effects of occupation and liberation. Ponting marshals plenty of evidence (all of which, unfortunately for the student of history, is unfootnoted) to show that the WW II ``was probably the most brutal war fought in modern times.'' The brunt of that brutality, he points out more than once, came on the eastern front during the almost unimaginatively murderous German invasion of the Soviet Union and the subsequent Russian counterattack. Ponting makes a strong case that ``the overwhelming importance of material superiority'' of the Allies was the key to the defeat of both Germany and Japan. In addition, the author offers several against- the-grain arguments, including his contention that Hitler's fatal invasion of Russia was ``highly logical''; that technological advances were not as decisive in the war's outcome as commonly believed; that the overwhelming majority of people in German and Japanese occupied countries were neither collaborators nor resisters; that the importance of anti-German resistance has been ``overemphasized''; and that liberation was not exactly liberating for the people in many Eastern European and Asian countries. A refreshingly unromantic view of a war that all too often is remembered in sanitized form. Read full book review >