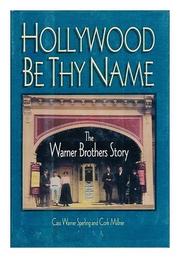 NON-FICTION
Released: Oct. 1, 1993
HOLLYWOOD BE THY NAME: THE WARNER BROTHERS STORY
by Cass Warner Sperling, Cork Millner, Jr. Warner
NON-FICTION
Released: Oct. 1, 1993
HOLLYWOOD BE THY NAME: THE WARNER BROTHERS STORY
by Cass Warner Sperling, Cork Millner, Jr. Warner
Intimate story of Harry, Jack, Albert, and Sam Warner and how they rose from immigrant rags to Hollywood riches by founding the Warner Brothers Studio—as told by Harry's granddaughter and family archivist Sperling, who spent 11 years researching, aided by Millner and with contributions by Jack Warner Jr., Ronald Reagan, and others. Though its invented dialogue reads like fiction, this biomosaic of the Warner brothers and their studio comes off as a neat bit of storytelling, shored up with long quotes from family members, studio executives, and the talents who worked with the Warners. Jack Warner—the youngest brother, who outlived the others and who, through a swift shot of financial skulduggery, became sole brother in charge—is marked as the singing and joking villain of the piece. Benjamin Warner flees the Russian village of Krasnashiltz and arrives in New York in 1883. In 1904, his young sons fall in love with the nickelodeon business, soon buy their own projector, lease a theater, and, by 1907, form the Duquesne Amusement Supply Company for distributing films. Jack, formerly Jacob, quits school in fourth grade, brings home two dollars a week by singing in public, then is hired by his brothers to drive people out of the theater between shows with his bad voice. The studio's growth as it makes features on Poverty Row—with Jack and Sam heading production in Hollywood and Harry running the New York office as final authority—first climaxes with Al Jolson introducing talkies at the thrilling premiere of The Jazz Singer, though fun-loving brother Sam dies as Jolson opens. Harry tries to give the studio some class while vulgar Jack focuses on slam-bang movies from the headlines. Finally, the monster that is TV arises. Best pages are from Jack Warner, Jr., the son fired from the studio by his father for reminding him too strongly of the father's first wife. (Thirty-two-page photo insert) Read full book review >