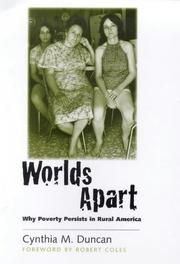 NON-FICTION
Released: May 1, 1999
WORLDS APART: WHY POVERTY PERSISTS IN RURAL AMERICA
by Cynthia M. Duncan
NON-FICTION
Released: May 1, 1999
WORLDS APART: WHY POVERTY PERSISTS IN RURAL AMERICA
by Cynthia M. Duncan
University of New Hampshire sociologist Duncan (Rural Poverty in America, not reviewed) looks at the social relations and political and economic institutions that perpetuate poverty in rural America. "Blackwell" (place names have been changed) in Appalachia and —Dahlia— on the Mississippi Delta, are two of the poorest areas in the US. Duncan studied the lives of the residents of these places, and what she found was communities where the "haves" and "have nots" inhabit different worlds within historically structured, rigid class and, in Dahlia, race divisions. In both places local elites—coal company operators in Blackwell, plantation owners in Dahlia—control not only the economic life of the community but the political life as well. Their power is near absolute, and they use public institutions, including schools, to further their own interests and punish those who cross them. The poor remain "powerless, dependent, and do not participate" in civic life. A kind of stasis sets in where the poor see no option but to give way to those who have always had power, and the powerful resist change as it may threaten their status. In contrast, "Gray Mountain," in northern New England, is a town with a strong civic culture based on a blue-collar middle class that has created public institutions—from little league to effective schools—that serve all in the community. Duncan, through in-depth investigation and interviews, concludes that only a strong civic culture, a sense among citizens of community and the need to serve that community, can truly address poverty. Yet class and race relations in places like Blackwell and Dahlia preclude such a sense of community. Her answer, going against so much conventional wisdom, is federal government intervention, especially to create equitable school systems where they do not exist. Only such intervention, Duncan asserts, will give the poor the knowledge of alternatives, the hope they now lack. Moving and troubling. Duncan has created a remarkable study of the persistent patterns of poverty and power. (The book's foreword is by Robert Coles.) Read full book review >