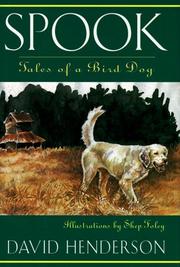 NON-FICTION
Released: Aug. 1, 1995
SPOOK: TALES OF A BIRD DOG
by Dave Henderson
NON-FICTION
Released: Aug. 1, 1995
SPOOK: TALES OF A BIRD DOG
by Dave Henderson
A charming paean to the sport of bird hunting by one of the elder statesmen of the wing-shooting press. Approaching 80, Henderson began hunting and writing about it 40 years ago, and his articles still run in magazines like Gun Dot and Pointing Dog Journal. The retired lawyer and former state legislator counters the popular image of beer-swilling, potbellied louts running amok in the field. He and his North Carolina companions are of the old school of southern quail hunters, by his own accounting a ``stubborn, opinionated, backward-looking, anachronistic'' lot (which, of course, is a matter of some pride among them). But first and foremost they are gentlemen, conservators of both nature and the hunting tradition. For these traditionalists, only two breeds of bird dogs (English setters and English pointers) will do and only one birdthe bobwhite quailis worth hunting. Outside of that, the formula is simple, if old- fashioned: ``A recipe for birdhunting requires four ingredients. They are birds, dogs, guns, and guys.'' Henderson plumbs the mystery and aesthetics of the hunting experience with the knowledgeable, poetic eye of a passionate outdoorsman, recounting a lifetime of dogs, hunting buddies, covey rises, missed shots, and other misadventures with a courtly, avuncular affability that gives these loosely organized tales and observations the agreeable tenor of a fireside chat (accompanied by Shep Foley's line drawings). Though mostly a collection of odds and ends, Henderson's remembrances express a fundamental moral code that demands respect for land, people, and animals. Of particular note is the relationship between hunters and their dogsa special bond of love, discipline, and shared adventure that Henderson limns with great affection and honesty as he memorializes Spook and other canine companions. A treasurethe next best thing to a day afield for longtime hunters or newcomers to the sport. Read full book review >