HOW TO COPE WITH SUBURBAN STRESS
by David Galef
FICTION & LITERATURE
Released: Aug. 30, 2006

HOW TO COPE WITH SUBURBAN STRESS
by David Galef
"Risky material met head on, in a courageous book that displays Galef's considerable skills quite brilliantly. Prepare yourself for a rough ride—but don't miss this one."
The wisecracking title scarcely hints at the depths of fear, grief and guilt plumbed with relentless energy in Galef's latest (Laugh Track, 2002, etc.). Read full book review > 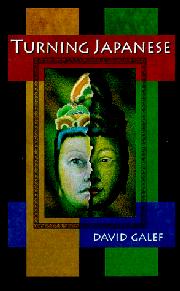 FICTION & LITERATURE
Released: Sept. 1, 1998
TURNING JAPANESE
by David Galef
FICTION & LITERATURE
Released: Sept. 1, 1998
TURNING JAPANESE
by David Galef
Galef's second (Flesh, 1995) is about a young American who goes abroad to find himself, in a novel that's likely to sweep readers up only sporadically. Cricket Collins (his mother, who died when he was a boy, named him) is 22 when he gains his father's disapproval by deferring law school and going to Japan instead to teach English (mainly to businessmen). Once he's there, things aren—t propitious for those who want to like a book's protagonist, since Cricket seems shallow and callow at once'so hostile, for example, toward the kindly but admittedly maternal dorm mother (where he first lives) that he turns to petty thievery as a way to offend her and change things. It's gradually revealed that something deeper must be amiss with Cricket—an emotional scar left by his mother's death? He stays in Japan far longer than he—d intended, begins learning the language in earnest, even finds a girlfriend, named Reiko—with whom (as with anyone, except himself), we discover, he can never reach orgasm, though this is a secret he lets nobody know. —Craziness and cancer,— Cricket's father told him, run in the family—and Cricket's attempt to escape the latter gets so curiously lost amid the steadily, slowly, ongoingly amassed details of life in Japan that the reader has little sight of purpose or of focus on the quest, sensing only the waiting, not even clearly for what. There are customs, cooking, eating, shopping, teaching, the half-marooned doings of other expats. Only very late does the novel try to declare and seize its theme (as when Cricket's health falls apart, in a riveting trip to China), but even then there's little sense of an organic unity—as opposed to a unity of convenience—between travelogue on the one hand and psychological journey on the other. Ambitious work, though place and person remain merely congruent, not welded, with an unsatisfying inertness as the result. Read full book review >

FICTION
Released: March 1, 1996
TRACKS
by David Galef, illustrated by Tedd Arnold
FICTION
Released: March 1, 1996
TRACKS
by David Galef, illustrated by Tedd Arnold
When Albert, who is supervising the laying of new railroad track, drops his glasses, things get a little blurry. He has no time to go home for his spare pair. His hard-working crew puts down track through Sally's Pond, around cows that look like boulders, through a barn, and over some pine tree ``mountains.'' Fortunately for Albert, the Mayor loves the wacky ride on the train's inaugural run, and all's well that ends well. This starts with a funny premise, but because readers see, every step of the way, the truth behind Albert's mistakes, the second trip over the track (with the mayor) is a letdown. Arnold uses a looser style than usual, but the broad humor of the illustrations can't carry the piece. (Picture book. 4+) Read full book review > 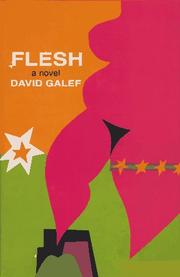 Released: April 1, 1995
FLESH
by David Galef
Released: April 1, 1995
FLESH
by David Galef
A witty first novel in which an English professor recounts his fascination with a charismatic colleague's sexual obsession (big women) and the depths to which it leads them both. When history professor Max Finster moves in next door to Don and Susan Shapiro in Oxford, Miss.—sporting two bikes, lots of bungee cords, and an arrogant air—it changes their quiet lives forever. The Shapiros graciously fix him up with a friend, and things seem to go well until Don notices that Max is perpetually on the look-out for a new—and preferably even larger—woman. As Max successfully (and sometimes literally) bounces from woman to woman, each one bigger than her predecessor, Don begins to live vicariously through him, even going so far as to drill a peephole into Max's bedroom. Don draws away from Susan, and their sex life suffers: His fantasies are of the seductive Max and Max's hefty girlfriends, not of his own trim wife. Don's involvement with Max's fetishism reaches its height when he introduces Max to his dream woman, a ``bulky Brunhilda'' named Maxine, and then eagerly awaits their titillating bungee-aided sex in the rigged bedroom. Although Susan calls him to bed before he can fully witness the ensuing scene, it's described later, a shocking yet fitting surprise and a skillful bit of black humor. Through Don, a genially dry narrator, Galef pays amusing, lyrical, and respectful tribute to large women and highlights our society's preoccupation with weight. The author declines to pinpoint any single reason for Max's desire to be enveloped in female flesh, thus avoiding simplistic explanations. Some of the secondary characters only clutter up the background, and Don's narration occasionally loses its sharp focus, but these are minor faults. Well written and cleverly executed. Read full book review >