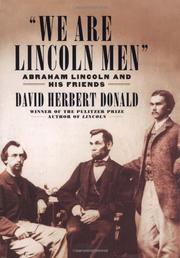 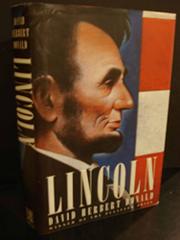 BIOGRAPHY & MEMOIR
Released: Oct. 1, 1995
LINCOLN
by David Herbert Donald
BIOGRAPHY & MEMOIR
Released: Oct. 1, 1995
LINCOLN
by David Herbert Donald
In a significant contribution to Lincoln scholarship, distinguished historian and Pulitzer Prizewinning biographer Donald (Harvard; Look Homeward: A Life of Thomas Wolfe, 1987, etc.) draws a richly detailed, absorbing portrait of our 16th president. The Lincoln that Donald gives us is an inexperienced, ill- prepared, and essentially passive man who nonetheless quickly grew into greatness as president during the nation's worst crisis. Lincoln, Donald argues, was by temperament and philosophy fatalistic and reactive, with a lifelong belief in the Doctrine of Necessity (human destiny controlled by a higher power) that finds expression in his assertion that ``the Almighty has His own purposes.'' Nonetheless, Lincoln was from childhood insatiably ambitious. Donald deftly traces Lincoln's rise from his hardscrabble frontier beginnings through his growth into an important local legislator and lawyer. Although Lincoln, a conservative Whig and devotee of Henry Clay, was for many years as unsuccessful as a politician as he was wealthy and prominent as an attorney, Lincoln's brilliant debating performance in his 1858 Senate race against Stephen A. Douglas catapulted him to national renown in the infant Republican party. Donald devotes most of his account to the story of Lincoln as war presidenthis at first inept, and gradually more skillful, stewardship of the armies, diplomacy, and other national affairs during the Civil Warthrough his assassination. Donald makes his case for his subject's passivity. However, Lincoln emerges as a chief executive who, with steadfastness of purpose and constant humor, resisted political pressures and personal attack from Democrats and Republicans alike, made bold decisions, and, although flexibly pragmatic about means, remained faithful to his inner vision of popular government and indissoluble union. A magisterial work, destined to assume its place with those of Beveridge, Sandburg, Thomas, and Oates as a standard life of Lincoln. (Book-of-the-Month Club split main selection; History Book Club main selection) Read full book review >