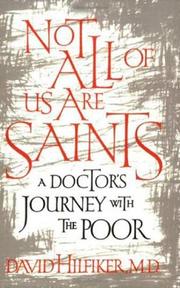 BIOGRAPHY & MEMOIR
Released: Aug. 1, 1994
NOT ALL OF US ARE SAINTS: A DOCTOR'S JOURNEY WITH THE POOR
by David Hilfiker
BIOGRAPHY & MEMOIR
Released: Aug. 1, 1994
NOT ALL OF US ARE SAINTS: A DOCTOR'S JOURNEY WITH THE POOR
by David Hilfiker
A powerful report of the experiences of a physician living and practicing medicine in the inner city. Hilfiker, whose previous book (Healing the Wounds, 1985) described his practice in rural Minnesota, moved to Washington, DC, in 1983 to join a small ecumenical religious community dedicated to working with the urban poor. With his wife and three young children, he moved into an apartment in Christ House, the first two floors of which were a medical recovery shelter for homeless men. Besides caring for patients there, he practiced at a nearby community clinic. As Hilfiker notes, this book is less about medicine than about class, race, and culture—about the ``awful power of poverty to break the human spirit.'' Often his patients, whose identities have been altered here, are beaten down by life, addicted to drugs or alcohol, mentally disturbed or incompetent, and living on the street or in shelters for the homeless. The chasm between the middle-class, white Hilfiker and his poor, black patients is ultimately unbridgeable, and he confesses freely to his feelings of helplessness, anger, frustration, and guilt as he comes to understand that he cannot redress all of society's wrongs—the problems of education, housing, and jobs are simply too enormous. He even comes to fear that he cannot practice good medicine, for his patients' circumstances make it impossible for him to prescribe the best treatments. In 1993, feeling not at all saintly, he retreated to Finland for a year of recuperation with his wife's family. Hilfiker's future remains a question mark, but clearly he does not intend to abandon the poor, and one hopes that he will not abandon writing, either. A deeply disturbing picture of the degradation of ghetto life and a painfully honest account of one man's attempt to do something about it. (Author tour) Read full book review >