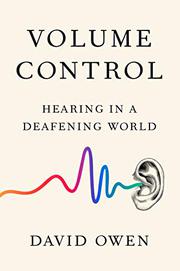 VOLUME CONTROL: HEARING IN A DEAFENING WORLD
by David Owen
"A bright, upbeat, sometimes funny dive into a serious subject that will spur many readers to get their ears tested."
New Yorker staff writer Owen (Where the Water Goes: Life and Death Along the Colorado River, 2017, etc.) makes sense of hearing and its loss. Read full book review > 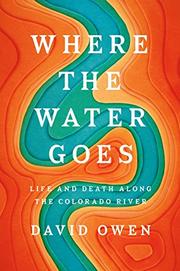 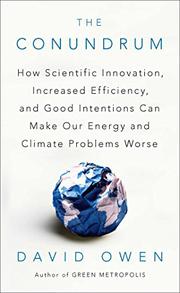 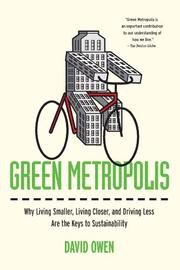 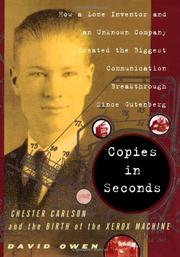 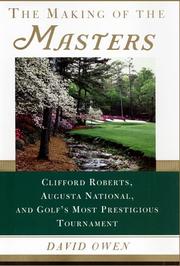 NON-FICTION
Released: April 5, 1999
THE MAKING OF THE MASTERS: CLIFFORD ROBERTS, AUGUSTA NATIONAL, AND GOLF'S MOST PRESTIGIOUS TOURNAMENT
by David Owen
NON-FICTION
Released: April 5, 1999
THE MAKING OF THE MASTERS: CLIFFORD ROBERTS, AUGUSTA NATIONAL, AND GOLF'S MOST PRESTIGIOUS TOURNAMENT
by David Owen
An involving and thorough look at pro golf's crown jewel and the driven individual who created it. Clifford Roberts, the martinet co-founder and chairman of Augusta National Golf Club, pursued his vision of excellence with a single-mindedness that would have impressed Captain Ahab. As Owen (My Usual Game, 1995) tells it, however, there was a more human side to the Masters" steely cynosure. Tracing Roberts's childhood during the financially unsteady 1890s and his coming-of-age in the Roaring '20s, Owen reveals the emotional underpinnings of a man best known as a control freak. The son of an impractical father and a chronically ill mother, Roberts learned early how to do things for himself. In New York during the heady 1920s, he quickly insinuated himself into a fast crowd on Wall Street, where his passion for golf cemented many important business and personal relationships. One crucial bond was with the immortal Georgia-bred golfer Robert Jones, to whom Owen credits the idea for the course; the rest, he contends, was Roberts's doing. In 1931, Jones and Roberts acquired property near Augusta, Ga., with the latter securing financing and arranging construction. At first, owing to the Depression, Augusta National foundered. Before long, however, the club established itself, mostly as a result of the Masters' growing prominence. The tournament is unique among tour majors in being run by a private club rather than a national body, which enabled Roberts and his successors to impose their high standards on every element, from the contestants' attire to the amount and type of broadcast advertising. While severe, this regimentation has created an event beloved by all. This sort of warmth arising from a cold adherence to discipline, Owen suggests, was the very core of Roberts's personality. Yes, he craved control, but he also was warm, generous, and loyal; former employees interviewed fondly recall Roberts's fairness and genuine concern for their welfare. A most enjoyable, and surprisingly moving portrait of a man and the institution he crafted in his own image. (32 pages color photos, not seen) (Author to ur) Read full book review > 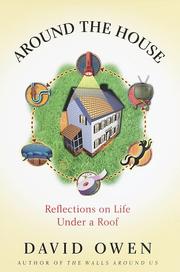 NON-FICTION
Released: Sept. 1, 1998
AROUND THE HOUSE: REFLECTIONS ON LIFE UNDER A ROOF
by David Owen
NON-FICTION
Released: Sept. 1, 1998
AROUND THE HOUSE: REFLECTIONS ON LIFE UNDER A ROOF
by David Owen
Humorous, genial tales of living in a small New England town, in a big old house demanding a handyman's talents that New Yorker writer Owen (The Walls Around Us, 1991, etc.) doesn't possess. Here are a fistful of quick sketches, fruity and clever, about the pitfalls and bonuses of owning a rambling 19th-century house, about encroaching middle age and the growing children who make that state of affairs so obvious, about knowing you have a pretty good job and an even better life but are forever dreaming of more. Owen is like a chummy frat pal full of ideas about optimizing goof-off time and who can write about it with easy grace. These collected pensÇes are mostly spot on, if obvious—he notes that —learning by doing invariably means learning by doing wrong" and that one might resent weekenders to his village, who "pump money into the town, often recklessly,— but at least they "don't pump hazardous chemicals into the river." Then there are times when he trots out one too many Owenisms, irksome and bourgeois, that clash with his eccentricity: "a tattered old sweater wouldn't feel as comfortable if you didn't also own a three-piece suit," or "choosing clothes from a pile on a couch seems almost like shopping—an emotional plus." Then he will make playful with the money issue—as when he is in the "throes of a powerful urge to spend a lot of money belonging to a bank"—and pull readers back into his comfortable groove. He is at his most delightful when cutting across the grain, boasting that of the $22 billion devoted by Americans to their lawns, virtually none was spent by him, and that McDonald's fries are an ideal open-chain hydrocarbon for removing oil paint from your hands. Reading Owen is like getting a gentle, relaxing massage as opposed to a Rolfing session. His pen is facile, his stories pleasing and fleeting. Read full book review > 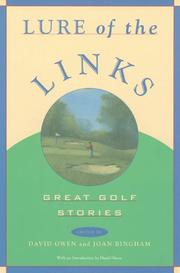 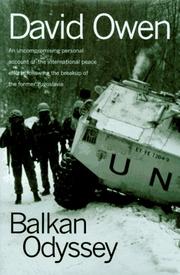 BIOGRAPHY & MEMOIR
Released: Feb. 1, 1996
BALKAN ODYSSEY
by David Owen
BIOGRAPHY & MEMOIR
Released: Feb. 1, 1996
BALKAN ODYSSEY
by David Owen
The British coauthor of the failed Vance-Owen peace plan for the former Yugoslavia provides a personal and opinionated chronicle of his endeavors to reach a peace, laying primary blame on the Americans for pursuing a policy of ``power without responsibility.'' Lord Owen, a seasoned and maverick politician, had faced many challenges in his career prior to accepting Cyrus Vance's request in 1992 to cochair peace negotiations for the former Yugoslavia. Indeed, he was known for taking on insurmountable tasks. What some referred to as ``Mission Impossible''—negotiating a Balkan peace- -was for Owen an irresistible challenge. It also becomes clear that this was an unusual odyssey, both humbling and infuriating, in which Owen was confronted with a ``physical callousness of action'' as well as a ``callousness of mind.'' Balkan Odyssey provides an insider's view and a painstakingly detailed picture of the two men's exhausting dealings with Balkan leaders and other parties. The account rarely departs from the conflict's diplomatic side and will not satisfy those looking for a discussion of the ground war or human suffering. Instead it charts the various stages of negotiations, with individual chapters on the Vance-Owen Peace Plan (which would have divided Bosnia-Herzegovina into ten provinces), the EU Action Plan, and the Contact Group. Despite the Vance-Owen Peace Plan's failure, Owen is convinced that it remains the fairest and best solution possible, and that ``delay has meant a progressively worse peace for the Muslims.'' Among Owen's controversial opinions is his view that the US should not have pushed for recognition of Bosnia-Herzegovina without the prior presence of a UN Prevention Force, and he insists that ``there are no Chamberlains or Daladiers depicted in this book''—self-defense against cries of appeasement leveled at him. Essential reading for historians and serious students of both the Balkan crisis and diplomacy in the postCold War world. (Author tour) Read full book review >

NON-FICTION
Released: June 1, 1995
MY USUAL GAME
by David Owen
NON-FICTION
Released: June 1, 1995
MY USUAL GAME
by David Owen
Owen's usual game is golf and, as might be expected from the author of The Walls Around Us (1991), this book displays his usual wit. Although he played as a teenager, Owen didn't rediscover his love of golf until he was 36 and a newly transplanted suburbanite. Now he even dreams about golf. This volume essentially is a collection of his magazine pieces on the game (originally published in places as various as Golf Digest and the New Yorker), held together loosely by the subject matter and his loopily funny perspective on it. Over the course of the book, Owen goes to golf school, where he falls in love with a variety of high-tech gadgets; makes the obligatory pilgrimage to Scotland's fabled courses; profiles inventor and club manufacturer Karsten Solheim; plays in the Disney Classic pro-am; reports on the dramatic 1993 Ryder Cup competition; and relates other golfing adventures. Owen is hilariously candid about his own shortcomings as a golfer (although judging from the scores he records as the book goes on, his game can't be too shabby) and about his fascination with the paraphernalia of the sport, from bag tags and golf towels to a wild variety of instructional gimmicks. He is suitably respectful of the game's history and lore without getting sappy about it. As he notes in one typical passage, ``To play the classic Scottish courses is to glimpse the logic that shaped the game we play today. Plus, the beers are bigger and you get to drive on the left side of the road.'' The book's only disappointment is the Ryder Cup piece, which adds little to the literature already accumulating around that contest. Although readers who play will get more out of it, even non- golfers will find much to amuse them in this excellent collection. (Author tour) Read full book review >

NONFICTION
Released: Oct. 16, 1991
THE WALLS AROUND US: THE THINKING PERSON'S GUIDE TO HOW A HOUSE WORKS
by David Owen
NONFICTION
Released: Oct. 16, 1991
THE WALLS AROUND US: THE THINKING PERSON'S GUIDE TO HOW A HOUSE WORKS
by David Owen
``Most...men,'' says New Yorker staff-writer Owen (The Man Who Invented Saturday Morning, 1988, etc.), ``feel a paralyzing fear...at a lumberyard or hardware store.'' Fortunately for the jack-of-few-trades man (or woman), courage—and the knowledge it's based on—can now be gleaned from the author's literate, lucid, and witty guide to home building and repair. Owen's own house, a Connecticut Colonial built around 1790, serves as his model. Needing to repaint the house, for instance, he sets off to find the ultimate paint, winding up at the firm of Keeler & Long, which makes paint for nuclear power plants (``It would probably be expensive,'' muses Owen, ``but it would last practically forever. Using it might even turn out to be a pretty good move, in the event of nuclear war''). There, he learns much about paint—including that the firm's epoxy-based product won't do for him (``epoxies [tend] to deteriorate in sunlight,'' warns proprietor Henry Long)—and passes that information on here, along with his own know-how on the history, nature, and uses and abuses of paints: We learn, for example, the pros and cons of latex paint, the best ways to keep paint from peeling off a house, and, in the sort of unexpected detail that livens every page, the trouble with letting a cow near a freshly oil-painted house—it will lick the paint, which contains flaxseed. Fascinating explorations of walls, roofs, kitchens, bathrooms, electricity, lumber (and its enemies: the stethoscope from a kid's toy medical bag is useful, Owen tells us, for detecting the munching of carpenter ants) follow, and come together in a detailed description of how, using power-tools, he adapted an extra bedroom into a custom-built study. Owen transforms even the repair of a leaking hot-water pipe into an enticing adventure: his congenial guidance will likely enthrall those who enjoy home repair—and, marvelously, many who don't. (Thirty-five line drawings—not seen.) Read full book review >