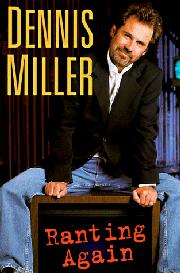 BIOGRAPHY & MEMOIR
Released: June 5, 1998
RANTING AGAIN
by Dennis Miller
BIOGRAPHY & MEMOIR
Released: June 5, 1998
RANTING AGAIN
by Dennis Miller
Cable TV satirist Miller (The Rants, 1996) is throwing his barbed tantrums again, dispensing some seriously smart-alecky stuff between his patented opener, "I don't want to get off on a rant here," and his closing tag, "that's just my opinion, I could be wrong." Generally, of course, he is not wrong. He's not supposed to be. The outrage is often common sense, but with an attitude. With the ephemeral topicality of a Will Rogers and the no longer arresting vocabulary of a Lenny Bruce, Miller (with his writers) expresses unique scorn for typical targets like lawyers, kitsch, and O.J. Simpson, as well as bad habits ("You've got bad eating habits if you use a grocery cart in 7 Eleven, okay?") and Senator D'Amato ("waste of an apostrophe"). He's against bad guys. He is, it seems, on the side of Mother's Day, feminism, and the pleasures of parenthood. Often, he verges on the politically correct. Hey, so he's not the counterculture iconoclast his way out hip scat riffs would indicate, okay? His preaching is founded on pop culture, so forget about the deep semiotics; he's just got the rants (or, as he calls it, "pay cable rant syndrome"). Style is all, and it's quite sufficient. Figures of speech, from irony and hyperbole to metonymy and synecdoche, abound. Once and future nonentities who may or may not have once appeared in the ‘zines seem to be cited simply for the musicality of their names. Trent Reznor, Lance Henricksen, Elsa Klensch—these are household names? It's all very trendy and, as we know, trendy is hip. And Miller, the old philosopher, is nothing if not hip. As luck would have it, he's also pretty funny in these in-your-face monologues. His patented sarcasm machine produces another caustic and clever, albeit impermanent, little volume. Read full book review > 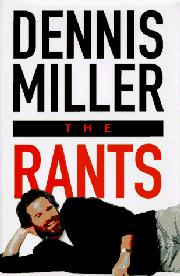 BIOGRAPHY & MEMOIR
Released: April 2, 1996
THE RANTS
by Dennis Miller
BIOGRAPHY & MEMOIR
Released: April 2, 1996
THE RANTS
by Dennis Miller
Talk show host Miller (as in HBO's Dennis Miller Live) reconnoiters the sorry state of the nation with a gathering of raving, raging monologues. ``Now,'' he usually starts, ``I don't want to get off on a rant here,'' whereupon the sage of cable TV walks the walk and talks the talk. Commenting on current events, Miller is a latter- day Will Rogers on speed. He's hot. He's cool. He's truly hip as he steers a course between laughs and logic. The editorial fustian covers everything from infomercials to schadenfreude, activism to parenthood, with a nod, inevitably, to the O.J. trial. He knows about men and women. ``Women don't like guys who are dangerous,'' he instructs. ``Women want us to think that because women are trying to kill us.'' There are references to multitudes who have achieved a few moments of fame and are scratching for the rest of their allotted 15 minutes. (Who will be able to identify Gary Busey, Dave Del Dotto, or Rico Suave a year from now? Who can identify them now?) The rap doesn't eschew all of the Seven Dirty Words, either, but, hey, ``it's a madhouse out there,'' says Miller. He feels ``like Heston waking up in the field and seeing the chimp on top of the pony.'' So don't expect Leno or Letterman (though there is an occasional decalogue not unlike a Letterman list). In Miller's Manichaean view everything is either Good or, more likely, Bad, and all is painted either black or blue. But as he admits in his standard tag line, ``that's just my opinion. I could be wrong.'' Much of the mockery is ephemeral hipster babble at a fever pitch, but there's also common sense and, okay, even a nugget of wisdom in what could be, if one stretches the point, a kind of self-helper for those simpletons whom Miller calls ``mooks.'' Read full book review >