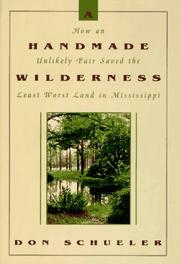 NON-FICTION
Released: Jan. 29, 1996
A HANDMADE WILDERNESS: TWO LIVES ON A BROKEN LAND
by Don Schueler
NON-FICTION
Released: Jan. 29, 1996
A HANDMADE WILDERNESS: TWO LIVES ON A BROKEN LAND
by Don Schueler
The beautifully drawn and affecting story of Schueler's (The Temple of the Jaguar, 1993, etc.) efforts to reclaim a devastated piece of the sandhills of Mississippi. Schueler, a white man, and Willie Brown, a black man and Schueler's mate, went searching for a rustic patch near their home base in New Orleans. They hadn't many bucks, so they sought the ``least worst land'' and found it in what became known as the Place, a logged-over parcel of 80 acres, rent and abused, but sporting wild meadows and swampy creeks, tupelo and slash and longleaf pine, and wonderfully archaic, almost alien, pitcher-plant bogs—in a word, it had promise. What follows is the long, meandering, and slow metamorphosis of the land: relocating plants from around the property, building a modest home and seeing it destroyed by 1969's Hurricane Camille and her 200-mph winds, building another home. It is a story of getting to know the land, its flora and fauna, its thankfully tolerant if sometimes vexing neighbors (one of them jacklit and shot one of Schueler's much- loved deer), its strange, storm-tossed weather. Most magical is just watching the changes wrought on the Place ``under the fullness of time,'' from a clear-cut moonscape to its rightful ecological niche. Schueler keeps his writing simple, direct, and clear as a bell, never stretching for a parable or torturing the landscape; rather, he delicately mines the endless seam of glorious, unexpected happenings that wait upon those who spend a good amount of time in a wild place and keep their eyes open. When Willie dies from AIDS in 1987, you can almost hear the land weep for the loss of such a friend. The sandhills are lucky to still have Schueler looking after a smattering of their acres. Read full book review >