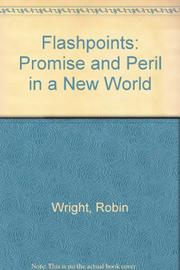 HISTORY
Released: Dec. 12, 1991
FLASHPOINTS: PROMISE AND PERIL IN A NEW WORLD
by Robin Wright, Doyle McManus
HISTORY
Released: Dec. 12, 1991
FLASHPOINTS: PROMISE AND PERIL IN A NEW WORLD
by Robin Wright, Doyle McManus
A once-over-lightly report on the sociopolitical and economic state of the Global Village from a pair of Los Angeles Times correspondents. In a summary audit longer on breadth than depth, Wright (In the Name of God, 1989; Sacred Rage, 1985) and McManus (coauthor, Landslide, 1988—not reviewed) rely largely on anecdotal evidence to assess what the future may hold. Notwithstanding the end of the cold war and the US-UN victory in the Persian Gulf, they conclude, any transition to a new world, let alone a new world order, will be convulsive. The authors argue, for example, that it's an open question whether Western-style freedoms can flourish in impoverished nations previously ruled by totalitarian regimes and unaccustomed to risk of almost any sort. They also note that many less-developed countries (as well as factions therein) are armed- -and dangerous insofar as ethnic, religious, ideological, or allied animosities lead to regional strife. In the meantime, Wright and McManus point out, have-not nations appear unable to halt counterproductive urbanization of their populations while affluent industrial nations attempt to stem a rising tide of immigrants, which has precipitated nativist reactions. Concurrently, they observe, governments of all stripes must grapple with AIDS, rising crime rates, drug abuse, terrorism, and other destabilizing plagues, plus insistent demands for greater accountability. Although grass-roots movements in many cases have begun to take matters into their own hands, the authors predict increasingly frequent challenges to authority if participatory democracy fails to yield quick payoffs (as it's likely to, absent sufficient resources). At a minimum, they assert, First World capitals would be well advised to draft coherent agendas calculated to reduce hemispheric frictions and to get their own houses in order while there's still time to exercise some control over fast-moving events. Snap judgments on issues that deserve more intensive analysis- -but, for its pessimism, an interesting contrast to Marvin Cetron and Owen Davies's Crystal Globe (p. 1193). Read full book review >