Edmund White was born on January 13, 1940, in Cincinnati, Ohio. His father was, according to White, "a small entrepreneur who made a lot of money and then lost most of it during the time when small businessmen were being superceded by big corporations." W 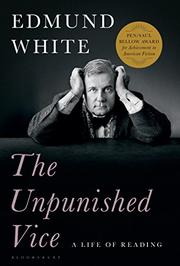 THE UNPUNISHED VICE: A LIFE OF READING
by Edmund White
"A literary delicacy with more takeaways than one can count."
The celebrated author takes us through the many shades of literature. Read full book review > 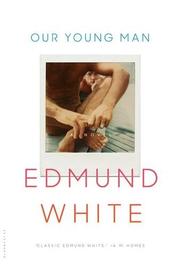 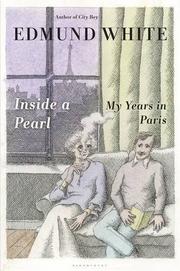 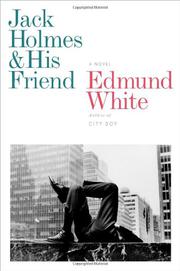 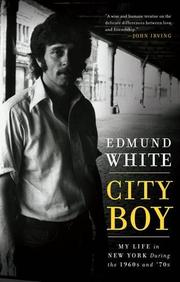 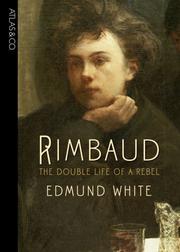 RIMBAUD: THE DOUBLE LIFE OF A REBEL
by Edmund White
NONFICTION
Released: Oct. 6, 2008

RIMBAUD: THE DOUBLE LIFE OF A REBEL
by Edmund White
"The latest gem in the publisher's already glittering Eminent Lives series."
Brief but illuminating biography of the troubled and troubling French poet. Read full book review > 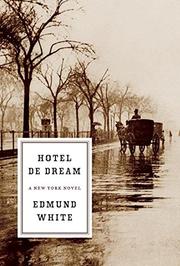 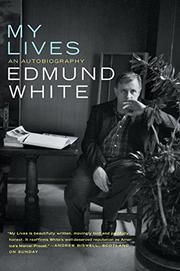 MY LIVES: AN AUTOBIOGRAPHY
by Edmund White
"White can be viewed here and in his other works, no matter what their subjects, as a quintessential travel-writer: His cultural, historic and artistic perceptions, as well as his sensory descriptions, are sharp and deeply perceptive, creating a rich sense of time and place."
The prolific novelist, memoirist and biographer (The Married Man, 2000, etc.) journeys through a lifetime of family, friends, lovers, work and play—at home and abroad. Read full book review > 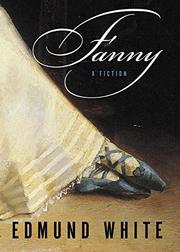 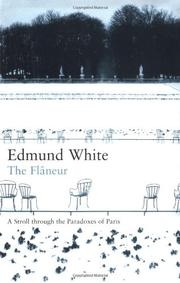 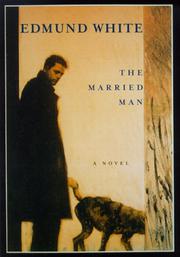 THE MARRIED MAN
by Edmund White
"A wise, sorrowful tale. "
White leaves the first-person, autobiographical world of his trilogy (The Farewell Symphony, 1997, etc.) and portrays a romance—and its dissolution—across three continents and six countries with his characteristic wisdom and sexual frankness, darkened by a new sense of foreboding. Read full book review > 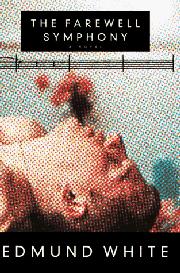 FICTION & LITERATURE
Released: Sept. 10, 1997
THE FAREWELL SYMPHONY
by Edmund White
FICTION & LITERATURE
Released: Sept. 10, 1997
THE FAREWELL SYMPHONY
by Edmund White
This long, rich fiction, set mostly in Manhattan and Paris, concludes White's autobiographical trilogy—and falls somewhere in quality between the pellucid excellence of A Boy's Own Story (1983) and the mannered redundancy of its sequel, The Beautiful Room Is Empty (1988). Here, the story of a generation—the one that originated the gay liberation movement in the late 1960s, then began dying out a few years later with the AIDS pandemic—is compressed into the remembered experiences of its narrator, a bereaved lover mourning the deaths and looking backward over 30 years' worth of sexual adventuring and slow progress toward maturity and success as a writer. White gives a good graphic picture of bohemian Paris in 1968, and elsewhere offers unusual perspectives on familiar locales (cruising at the Colosseum in Rome, observing ``Fire Island as an exact analogue of medieval Japan''). The novel's signal weakness is the sameness of the many, many men who wander in and out of the narrator's life (his recently deceased lover Brice is scarcely a character at all; on the other hand, Jamie, a sybaritic NYC ``blueblood,'' exhibits a cockeyed charisma that fully justifies the narrator's exasperated fascination with him). White writes plaintively about the disappointments of aging and losing one's sexual allure, and convincingly connects the decline of phallic power with the fear of literary senescence. If he's a bit smug about the mores and pleasures of being a gym rat, he writes vividly, and always amusingly, about the mechanics and etiquette of ``tricking.'' White's unmatched ability to communicate the tension between asserting one's right to be ``different'' and yearning to be accepted as ``normal'' is brilliantly displayed again. Nothing human is alien to him, and none of his alienated souls is anything less than achingly human. (First serial to the New Yorker; Book-of- the-Month selection) Read full book review > 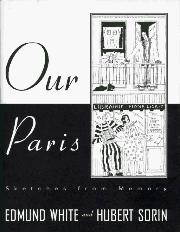 NON-FICTION
Released: Nov. 6, 1995
OUR PARIS: SKETCHES FROM MEMORY
by Edmund White, Hubert Sorin
NON-FICTION
Released: Nov. 6, 1995
OUR PARIS: SKETCHES FROM MEMORY
by Edmund White, Hubert Sorin
White and Sorin's Paris isn't exactly like yours or mine: High-fashion designer Azzedine Alaãa lives next door, Julian Schnabel is their host for dinner, and White has the enviable opportunity to introduce another Julian (Barnes) to Tina Turner. ``I haven't read Flaubert's Parrot yet, but I have it on my bedside table,'' she assures the author. This delightful little book is full of such snippets of harmless gossip, often about the not-so- famous people who are indispensable to Parisian life: the concierge, the fruit-and-vegetable man, the cafÇ waiters who serve croissants to Fred, the authors' basset hound. White is, of course, the author of novels (A Boy's Own Story, 1982, etc.) and an award- winning biography of Jean Genet (1993). Sorin was his lover, an architect turned illustrator who died last year of AIDS. They embarked on this joint project during Sorin's illness. It is remarkable, then, how full of life his witty drawings are, and White's text is written in the same spirit, acknowledging but never succumbing to Sorin's impending death. ``Despite the sometimes catty sound of this book, . . . its subtext is love,'' he writes. Read full book review > 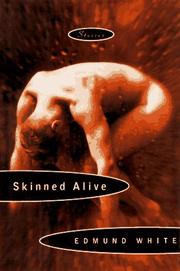 FICTION & LITERATURE
Released: July 18, 1995
SKINNED ALIVE: STORIES
by Edmund White
FICTION & LITERATURE
Released: July 18, 1995
SKINNED ALIVE: STORIES
by Edmund White
A depressing, disappointing first collection from accomplished gay biographer, novelist, and essayist White (The Burning Library, 1994, etc.). All eight stories here suffer from the weight of dread. In ``Pyrography,'' the fear is that of gay teen Howard, on a camping trip with two straight friends, while ``Running on Empty'' chronicles an American expatriate's visit to his relatives in Texas—a visit plagued by the young man's terror that his HIV infection will explode into full-blown AIDS and leave him at the mercy of the strangers who are his family. In ``An Oracle,'' Ray loses his longtime lover to AIDS, then goes to Greece, where he has a mindless fling with a male hustler. Here, as in most of the pieces, White enumerates the habits, traits, and tendencies of his characters, usually in the past tense, never letting them evolve, never letting them breathe with any verisimilitude. ``She had little sense of the dramatic possibilities her life provided,'' he comments of a woman in ``Running on Empty''—a remark that, unfortunately, could also be made about the author's depiction of all his characters, including those in, say, ``Palace Days,'' in which two New Yorkers move to Paris after the glory days of gay liberation end abruptly with the onset of the AIDS epidemic; they try fatally to keep their voracious and unsafe sexual appetites fed as friends and former lovers die off all around them. Throughout, the volume is filled with intelligence and clever, wry observations (``Like other brilliant men and women he dissolved every solid in a solvent of irony,'' the emotionally barren narrator of the title story says of another narcissistic American in Paris), but these moments are isolated and never connect into a coherent vision as they do so brilliantly in White's nonfiction. A dour side-trip by the well-traveled White. Read full book review > 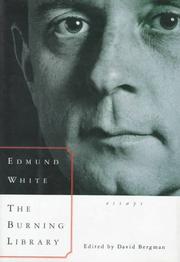 ESSAYS & ANTHOLOGIES
Released: Oct. 12, 1994
THE BURNING LIBRARY: ESSAYS
by Edmund White
ESSAYS & ANTHOLOGIES
Released: Oct. 12, 1994
THE BURNING LIBRARY: ESSAYS
by Edmund White
Spanning 25 turbulent years in gay history and his own career as a writer, a collection of White's (Genet: A Biography, 1993, etc.) frequently humane and perceptive essays. Whether literary or sociological, the essays gathered here thematically divide neatly into sections by decade: the efflorescence of the gay movement in the '70s; the growing effect of the AIDS crisis on the gay community in the '80s; and finally, the grief and anger of the '90s. The first essay, the never before published ``The Gay Philosopher,'' is White's hopeful self-assertion and self-examination as a homosexual, written in the year of the Stonewall riots; and the last, ``The Personal Is Political,'' looks back in some bitterness over his development as a novelist trying to reach both straight and gay readers and the devastation of AIDS. Most of these pieces were written for such publications as Vanity Fair, the Times Literary Supplement, and the New York Times Book Review, for White writes for the humanistic audience of the Common Reader. His acutely discerning surveys of writers like Tennessee Williams, Christopher Isherwood, and Jean Genet are aesthetically, not ideologically, driven; their homosexuality is presented as a fact to be examined, like their works, not as an issue to be propagandized. A stylist influenced by Nabokov and Proust, White is surest when examining words themselves—whether the poetry of James Merrill or the etymology of queer slang—but he displays a novelist's penetrating skepticism in addressing such contentious matters as straight-gay friendships, racial attitudes, or the '70s S&M scene. Temperamentally, though, his moderation sometimes leads to overoptimism or naive generalization when he examines broader issues of gay culture, and many of his earlier opinions are brutally undercut by the frustration of gay civil rights, the culture wars, and the deaths of friends, lovers, and artistic peers. The moving record of a moderate humanist in extreme circumstances, who is eventually overwhelmed by them. (Quality Paperback Book Club alternate selection) Read full book review > 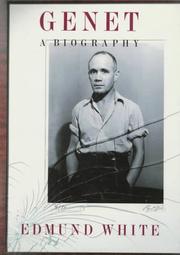 NONFICTION
Released: Oct. 28, 1993
GENET: A BIOGRAPHY
by Edmund White
NONFICTION
Released: Oct. 28, 1993
GENET: A BIOGRAPHY
by Edmund White
An exhaustive and perhaps definitive biography of the celebrated French writer and thief (1910-86), who looks almost human through the eyes of the much tamer White (The Beautiful Room is Empty, 1988, etc.). It's to Genet's credit that, once he became famous enough to establish a public persona, he quite frankly assumed the role of a criminal outcast. The son of an unknown father and an impoverished mother, Genet was raised in a dreary succession of orphanages and foster homes. As a child, he showed signs of great intelligence and creativity, but, as a ward of the state, he couldn't be educated for anything other than manual labor. Incorrigible and fiercely independent, he turned to theft at an early age and spent most of his adolescent years in reform schools and prisons. It was during this period that he became conscious of his homosexuality; throughout the rest of his life, he tried to insulate himself in masculine societies that re-created the brutal and isolated asylums of his youth. ``Boiling over with contradictions, Genet was cruel and sensitive,'' says White, ``a moralist who stole from friends, a petty thief who forged copies of his own quite genuine masterpieces.'' Genet's early writings—Our Lady of the Flowers and The Miracle of the Rose—brought him to the attention of Cocteau and the surrealists, but it was the patronage of Sartre that made Genet famous—and that brought him a pardon from the president of France. Ironically, Genet found it more difficult to write as a free man than as a prisoner, and, in his later years, he nearly stopped working altogether. He finally left France for Morocco (where he's buried) and took up the cause of the Palestinians. A thorough and painstaking job that, however, could have been accomplished in half the space. Scholars will find Genet essential; most others will find a lot to skim. (Useful notes; 16 pages of photographs—not seen) Read full book review >