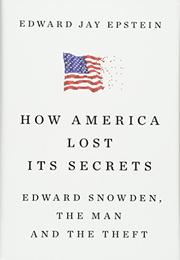 HOW AMERICA LOST ITS SECRETS: EDWARD SNOWDEN, THE MAN AND THE THEFT
by Edward Jay Epstein
BIOGRAPHY & MEMOIR
Released: Jan. 17, 2017

HOW AMERICA LOST ITS SECRETS: EDWARD SNOWDEN, THE MAN AND THE THEFT
by Edward Jay Epstein
"A wild and harrowing detective story and impressively evenhanded portrait of a very sticky case."
A nuanced portrait of the government contractor who absconded with top-secret National Security Agency documents in May 2013. Read full book review > 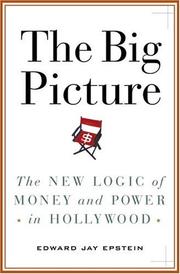 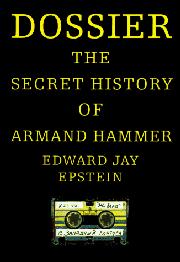 BIOGRAPHY & MEMOIR
Released: Oct. 1, 1996
DOSSIER: THE SECRET HISTORY OF ARMAND HAMMER
by Edward Jay Epstein
BIOGRAPHY & MEMOIR
Released: Oct. 1, 1996
DOSSIER: THE SECRET HISTORY OF ARMAND HAMMER
by Edward Jay Epstein
A revealingly revisionist biography of Armand Hammer who, before his death at 92 in 1990, had made a considerable name for himself as an industrialist, patron of the arts, philanthropist, and unofficial envoy to Communist seats of government. Drawing on a wealth of previously classified material from KGB files and other sources, Epstein (Deception, 1989, etc.) documents the substantive disparities between reality and his subject's carefully cultivated public image. While sojourning in the USSR during the early 1920s, the Bronx-born Hammer met Lenin and became a Comintern agent responsible for laundering the money used to pay undercover operatives in North America. Returning to the US during the Depression, the would-be magnate did not strike it rich until 1956, when he used his third wife's money to latch on to Occidental Petroleum, which, with a little luck and a lot of bribes, he turned into a transnational energy colossus. Taking advantage of auld acquaintance with long-dead Red luminaries, he also became a vocal advocate of unrestricted East/West trade during the height of the Cold War. A gifted and tireless self-promoter, Hammer was a gleeful forger as well; with the connivance of his Kremlin accomplices, he flooded the global art market with fake FabergÇ objets. While shamelessly lobbying for a Nobel Peace Prize in his twilight years, moreover, he picked up a conviction for violations of US election law. In addition he faced constant accuations of wrongdoing by the FBI, IRS, SEC, State Department, and other federal agencies. Nor, by Epstein's tellingly detailed account, was the high-profile Hammer a much better bargain for members of his extended family, friends, and business associates (whose tenure seldom outlasted their usefulness) or Occidental's stockholders. A dirt-dishing, painstakingly corroborated life story that sets the record straight on a master con man who fooled most of the people most of the time. (16 pages b&w photos, not seen) Read full book review >

Released: May 5, 1989
DECEPTION: THE INVISIBLE WAR BETWEEN THE KGB AND THE CIA
by
Released: May 5, 1989
DECEPTION: THE INVISIBLE WAR BETWEEN THE KGB AND THE CIA
by
Under the benevolent banner of glasnost, could the Soviet Union really be trying "to win strategic advantages through peace-time deception"? And if so, is there historical precedent (or "mind of the state") to bear this out? Moreover, is the US susceptible to deception based on Lenin's "Tell them what they want to hear" principle? Epstein sets out to answer these questions by reaching back to Lenin's manipulation of Armand Hammer (and Khruschev's, too); the establishment of the Soviet Trust in the Twenties; the Philby/Angleton connection (wherein Philby duped America's chief of counterintelligence); the use of Fedora, a supposedly turned Russian agent to establish the credentials of KGB officer Nosenko; the (probable) use of Nosenko to discredit bonafide defector Golitsyn; the intentional abuses of SALT; and the Soviets' continuing ability to establish moles who can comment on how well their sanctioned defectors' stories are being taken. Epstein also details, through extensive interviewing of Angleton and the cadre at one time supporting him, how the CIA often falls victim to its preconceptions, which the Soviets cannily (and continually) manage to authenticate. Epstein's revelations make Angleton seem prescient, and the fact that "almost every intelligence official who has been involved with the Nosenko case had had his career wrecked" seems ominous. This clear, elegantly written caveat from the author of Legend: The Secret Worm of Lee Harvey Oswald, Agency of Fear, etc. is a matter-of-fact indictment of shortsighted domestic policies and interagency infighting—and makes a trenchant case for KGB supremacy over the CIA and the NSC and the FBI, with their all-too-willing collusion in it. Read full book review >