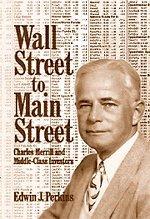 NON-FICTION
Released: March 1, 1999
WALL STREET TO MAIN STREET: CHARLES MERRILL AND MIDDLE-CLASS INVESTORS
by Edwin J. Perkins
NON-FICTION
Released: March 1, 1999
WALL STREET TO MAIN STREET: CHARLES MERRILL AND MIDDLE-CLASS INVESTORS
by Edwin J. Perkins
Merrill Lynch, Pierce, Fenner & Smith is the world's most successful brokerage firm. Perkins (History/Univ. of Calif., Los Angeles) tells of its founder and how, with his eponymous partners, he brought the blessings of investing to the masses. Perkins focuses on Charlie Merrill as businessman, foregoing deep character delineation. In a stab at financial hagiography, comparison is made to larger-than-life folk like J.P. Morgan. Undeniably, Charlie (as he is called to this day) wielded an important influence on Wall Street and how the Street did business, but contrary to the author's manifest intent, this first published biography somehow makes him seem less a visionary than a comic strip bigwig. The narrative of Charlie, an everyday southern gent who rose to great power and wealth, never ignites. From his college days, through his days as the boss of both the Safeway grocery chain and his own Wall Street business, to his semi-retirement and ultimate demise, Charlie seems, frankly, like a tedious fellow—one with penchants for bridge, obedience to his commands, and, not least, trophy wives. (For a more passionate view, one might consult the works of his son, poet James Merrill). The founder's personal story is lightly integrated with the ascendance of Merrill Lynch. Promoting first-rate public relations, new marketing techniques as well as intensive brokers' training, Merrill Lynch did, indeed, democratize investing and became a great enterprise with branches as ubiquitous as Starbucks. But one still awaits the definitive study of MLPF&S as a business phenomenon. Meanwhile, the present text, if not animated, is clear and generally accurate (despite Perkins's grating habit of calling the back office, where bookkeeping is done, by the more theatrical but mistaken term, "backstage"). A decent, not definitive attempt to depict, at once, the history of a business and its founder, sounding more like a curriculum vitae than a full-blown biography of Merrill and his company. Read full book review >