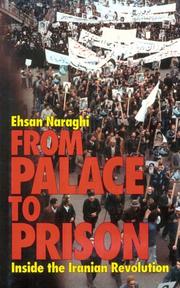 HISTORY
Released: Jan. 14, 1994
FROM PALACE TO PRISON: INSIDE THE IRANIAN REVOLUTION
by Ehsan Naraghi
HISTORY
Released: Jan. 14, 1994
FROM PALACE TO PRISON: INSIDE THE IRANIAN REVOLUTION
by Ehsan Naraghi
Eight conversations between the author and Mohammad Reza—Shah of Iran until 1979— as well as a record of life in an Iranian prison under the Ayatollah's regime. On September 23, 1978, Naraghi, a prominent Iranian sociologist, met with the Shah in the Shah's summer palace in Tehran. Already a friend of Queen Farah through family connections, the author believed that he was called in because the Shah felt isolated and abandoned, confused by the discrepancies between official reports of Iranian problems and by the daily incidents in the street. In eight subsequent talks—which the sociologist dutifully recorded—the two discussed topics ranging from the origins of the revolutionary movement to an analysis of day-to-day events. But despite the Shah's apparent desire for information, he ``lacked a complete picture,'' Naraghi says, ``because he preferred to feed his own fantasies rather than mend his ways.'' Unfortunately, rather than offer a complete picture here of the dramatic ideological transition then going on in Iran, Naraghi emphasizes the self-aggrandizing details of the Shah's daily life, as well as the importance to the Shah of his counsel. After the revolution, Naraghi was imprisoned three times, spending 33 months behind bars. But here, too, the author concentrates on prisoners who were important politicians and intellectuals, as well as on wealthy ``economic detainees,'' many of whom asked him for advice. Naraghi was finally let free largely because of the efforts of one Rassouli, a driver who'd worked for him before the revolution. In a section called ``The Quiet Courage of Simple People,'' the author describes his surprise at his former driver's help: Even though Rassouli ardently supported the new Islamic state, he organized a petition for Naraghi's release, inspiring a tribunal to report back that ``Your man has been a victim of ill-intentioned machinations.'' Today, Naraghi lives in exile in Paris. A detailed but condescending and rather dull portrait, with few insights, of a problematic time in Iran's history. Read full book review >