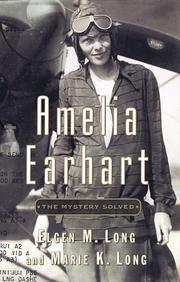 BIOGRAPHY & MEMOIR
Released: Nov. 1, 1999
AMELIA EARHART: THE MYSTERY SOLVED
by Elgen M. Long, Marie K. Long
BIOGRAPHY & MEMOIR
Released: Nov. 1, 1999
AMELIA EARHART: THE MYSTERY SOLVED
by Elgen M. Long, Marie K. Long
A detailed chronicle of the last days of Amelia Earhart and her navigator, Fred Noonan, and what went before, based upon an exhaustive 25-year study. Celebrated pilot Elgen Long and his coauthor wife, a public relations consultant with the Western Aerospace Museum, claim that the solution of the mystery surrounding the disappearance of the Electra, Earhart's plane, has never been found until now. The fatal flight began on July 2, 1937, during an era of "firsts" in the fast-developing technology of pioneer aviation. As speed and endurance records toppled around them, Earhart and Noonan took off on an around-the-world flight across the equator. Wiley Post had soloed around the world in a record seven days in 1933. Earhart's flight in a late model plane had been bankrolled and otherwise supported by her influential husband, G.P. Putnam of Putnam Publishers, many friends, the U.S. Coast Guard, the Navy, the Army Air Corps, and aviation experts. Every possible precaution seemed to have been taken for a successful flight. But as a newly discovered report reveals, while Earhart and Noonan were flying the leg from Lae, New Guinea, to remote Howland Island in the Pacific, a faulty direction finder, poor radio communications, and an inaccurate map of Howland led the Electra off course while the plane ran out of fuel. Earhart and expert navigator Noonan did not know the Morse code used by the military. Earhart's last voice transmission noted that she was running out of fuel. Debunking rumors that Earhart and Noonan were captured by the Japanese, the Longs conclude that the plane, without any survival equipment aboard, must have ditched in the vast Pacific, miles from Howland. The empty fuel tanks would have filled up rapidly with sea water, causing the Electra to sink. The Longs' extensive research, coupled with their mastery of technical detail, should make this the definitive study of its subject. Read full book review >