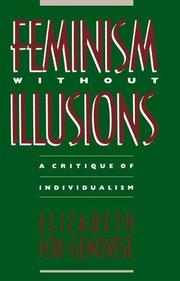 NON-FICTION
Released: April 23, 1991
FEMINISM WITHOUT ILLUSIONS: : A CRITIQUE OF INDIVIDUALISM
by Elizabeth Fox-Genovese
NON-FICTION
Released: April 23, 1991
FEMINISM WITHOUT ILLUSIONS: : A CRITIQUE OF INDIVIDUALISM
by Elizabeth Fox-Genovese
Here, Fox-Genovese (Humanities, History, & Women's Studies/Emory Univ.; co-author, Fruits of Merchant Capital, 1982) collects highly philosophical arguments (all but one chapter previously published in learned journals) comprising a ``feminist critique on the theory of individualism,'' that system of thought in which ``rights'' are ``grounded in the individual.'' Unfortunately, although Fox-Genovese insists that ``feminist history must retain its engagement with women in the world,'' the book itself is grounded in citations rather than human experience. The first two chapters argue that the images of ``collectivity,'' sisterhood and community, are derived from the ``dominant male discourse of ideas'' and perpetuate the subordination of women. Like many other feminists, Fox-Genovese believes that all women are deprived, victimized, excluded, that all men are dominant, powerful, and excluding, that pornography, indeed most social institutions, exploit women, who need a new ``discourse,'' political power, their own history, ``canon,'' ``culture.'' In these generalizations, there are no deprived men, no successful women, only white, middle-class, educated, employed, and healthy anatomically opposed creatures forever slugging it out on the domestic and economic battlefront. Along with the generalizations, there are the usual slogans (``The personal is the political''), fashionable jargon (``hegemonic ideology''), and personifications (``feminism's temptation to follow individualism''), most of which, devoid of human agency, nonetheless ``struggle,'' ``marry,'' ``divorce,'' ``embody.'' Abstract and intellectualized, but intriguing for its reasoned assault on the philosophical underpinnings of society. Read full book review >